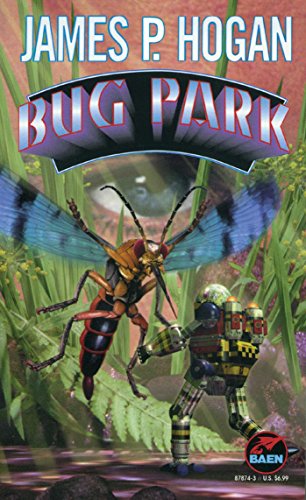 Kevin Heber had it good. He had his own lab, a colleague he could trust, and an idea that could make him millions. Using his father's breakthrough technology in direct neural interfacing, he and his friend Taki have created a new entertainment media - live action adventure in micro mechanical scale. Bug Park: The ultimate out of body experience. And Taki's uncle wants to take it public. Two problems: 1) Kevin and Taki are teenagers. 2) Somebody wants to squash Bug Park dead, and Kevin's father along with it.

Ben Hogan discovered golf as a fifteen-year-old caddie. He turned pro at seventeen, joined the tour full-time as a nineteen-year-old in 1931, and has won nine pro majors. A four-time PGA Player of the Year, he is one of only four golfers to win all four professional majors. At forty-one, he won five of six tournaments, including the Masters, U.S. Open and the British Open. Hogan died at eighty-four in 1997 in his home in Fort Worth.

Hogan's latest near-future speculation (Realtime Interrupt, 1995, etc.) involves insect-sized miniature machines: Originally developed to assemble true nanomachines, these prove to have other more startling applications. Thanks to its revolutionary interface, Eric Heber's Neurodyne is the industry leader in building tiny machines that can be operated, you-are-there fashion, by linked humans who thus obtain amazing new perspectives: Filing cabinets loom like skyscrapers, and insects--terrifying monsters on this scale--can be observed, hunted, or battled. So 15-year-old Kevin Heber and his buddy, Taki Ohira, have created Bug Park, where they can explore and interact with this peculiar and fascinating world. But then Kevin accidentally learns that his stepmother, the beautiful, ice-cold Vanessa, is planning to sabotage Neurodyne and sell out to rival Microbotics, owned by her secret lover, Martin Payne. With the help of lawyer Michelle Lang and chief engineer Doug Corfe, Kevin directs his machines to invade Payne's lawyer's office in search of evidence to convince the oblivious Eric. But everything goes wrong, Payne and his cohorts are alerted to the threat, and Vanessa as an insect-sized assassin creeps forth to eliminate the unsuspecting Eric. So, with Michelle a captive, and Doug unable to convince the police, can Kevin and Taki's tiny army save the day? Charming and remarkable microengineering and astounding microperspectives, coupled with an old-hat evil-stepmother plot and its predictable complications: Root for the little guys, tolerate the remainder. -- Copyright ©1997, Kirkus Associates, LP. All rights reserved.