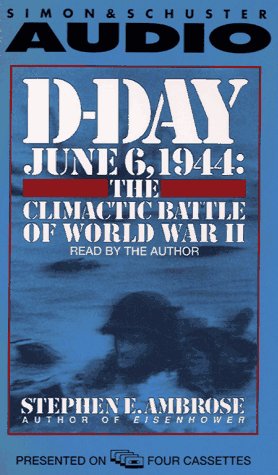 The author of Eisenhower chronicles the events, politics, and personalities of this pivotal day in World War II, shedding light on the strategies of commanders on both sides and the ramifications of the battle. Read by Stephen Ambrose. Simultaneous.

Published to mark the 50th anniversary of the invasion of Normandy, Stephen E. Ambrose's D-Day: June 6, 1944 relies on over 1,400 interviews with veterans, as well as prodigious research in military archives on both sides of the Atlantic. He provides a comprehensive history of the invasion which also eloquently testifies as to how common soldiers performed extraordinary feats. A major theme of the book, upon which Ambrose would later expand in Citizen Soldiers, is how the soldiers from the democratic Allied nations rose to the occasion and outperformed German troops thought to be invincible. The many small stories that Ambrose collected from paratroopers, sailors, infantrymen, and civilians make the excitement, confusion, and sheer terror of D-day come alive on the page. --Robert McNamara

Stephen E. Ambrose, the Boyd Professor of History at the University of New Orleans, is Director of the Eisenhower Center and President of the National D-Day Museaum in New Orleans. He is the author of Band of Brothers and Pegasus Bridge as well as a two-volume biography of Dwight D. Eisenhower. He lives in Bay St. Louis, Mississippi.