Items related to The Law of Peoples: with "The Idea of Public Reason...

Rawls, John The Law of Peoples: with "The Idea of Public Reason Revisited"

The Law of Peoples: with "The Idea of Public Reason Revisited" 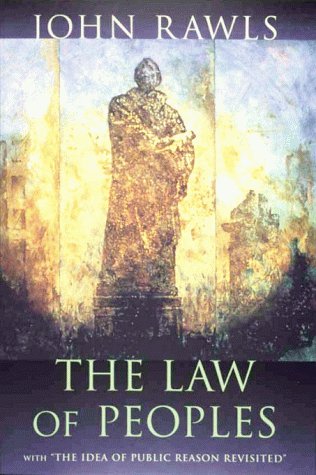 This book consists of two parts: the essay "The Idea of Public Reason Revisited," first published in 1997, and "The Law of Peoples," a major reworking of a much shorter article by the same name published in 1993. Taken together, they are the culmination of more than fifty years of reflection on liberalism and on some of the most pressing problems of our times by John Rawls.

"The Idea of Public Reason Revisited" explains why the constraints of public reason, a concept first discussed in Political Liberalism (1993), are ones that holders of both religious and non-religious comprehensive views can reasonably endorse. It is Rawls's most detailed account of how a modern constitutional democracy, based on a liberal political conception, could and would be viewed as legitimate by reasonable citizens who on religious, philosophical, or moral grounds do not themselves accept a liberal comprehensive doctrine--such as that of Kant, or Mill, or Rawls's own "Justice as Fairness," presented in A Theory of Justice (1971).

The Law of Peoples extends the idea of a social contract to the Society of Peoples and lays out the general principles that can and should be accepted by both liberal and non-liberal societies as the standard for regulating their behavior toward one another. In particular, it draws a crucial distinction between basic human rights and the rights of each citizen of a liberal constitutional democracy. It explores the terms under which such a society may appropriately wage war against an "outlaw society," and discusses the moral grounds for rendering assistance to non-liberal societies burdened by unfavorable political and economic conditions.

John Rawls was James Bryant Conant University Professor at Harvard University. He was recipient of the 1999 National Humanities Medal.

[These essays are] some of [Rawls's] strongest published expressions of feeling...These are the final products of a remarkably pure and concentrated career...The writings of John Rawls, whom it is now safe to describe as the most important political philosopher of the twentieth century...owe their influence to the fact that their depth and their insight repay the close attention that their uncompromising theoretical weight and erudition demand. (Thomas Nagel New Republic)

Rawls offers us the appealing vision of a social order that every citizen finds legitimate despite large differences in their personal values. In The Law of Peoples, he attempts a parallel feat for global society. He tries to spell out a Law of Peoples that both liberal and non-liberal peoples can agree upon to govern their international relations. This involves steering a judicious mid-course between liberalism's imperialist and isolationist tendencies...I should say straight away that this is the most engaging and accessible book Rawls has written. Although some of the daunting conceptual apparatus from Political Liberalism appears from time to time, for the most part Rawls lays out his argument in a straightforward way, and refers extensively to historical and contemporary episodes to illustrate it. (David Miller Times Literary Supplement)

John Rawls is one of the great political philosophers of the 20th century...His ideas have not only sparked a lively debate among philosophers, which continues to this day, but they have also been taken up by economists, sociologists and others. So The Law of Peoples, Mr. Rawls's latest work and probably his last significant effort, deserves to be read with interest, and some respect. (The Economist)

Now, in an effort to turn realpolitik on its big, bald head, Rawls in The Law of Peoples proposes to extend his historicist, pragmatic notions of justice to the larger world of 'peoples'--the term he prefers to 'nations.' He lays out a series of general principles--among them, that peoples are free and independent, should honor human rights, and should observe a duty of nonintervention--that can and should be accepted as a standard for regulating their behavior toward one another. Without the slightest hint of millenarian fever, he goes so far as to assert that we stand on the brink of a 'realistic utopia'...The Law of Peoples seems likely to reframe the debate about what is possible in the international realm. In contrast to the chastened, inward gaze of most 20th-century thought, Rawls's book is one of those rare works of philosophy that directs its energies outward. It has the potential to send shockingly optimistic reverberations through the world at large, and maybe even jolt those somber-suited realists right out of the realpolitik. (Will Blythe Civilization)

Why should we care whether Rawls has modified his difference principle so that it avoids unpopular outcomes? In the course of doing so, he advances some excellent arguments. (The Mises Review)

1. The Law of Peoples: with "The Idea of Public Reason Revisited"

2. The Law of Peoples: with "The Idea of Public Reason Revisited" Rawls, John

3. The Law of Peoples: with "The Idea of Public Reason Revisited"