Items related to If You're an Egalitarian, How Come You're So...

Cohen, G. A. If You're an Egalitarian, How Come You're So Rich?

If You're an Egalitarian, How Come You're So Rich? 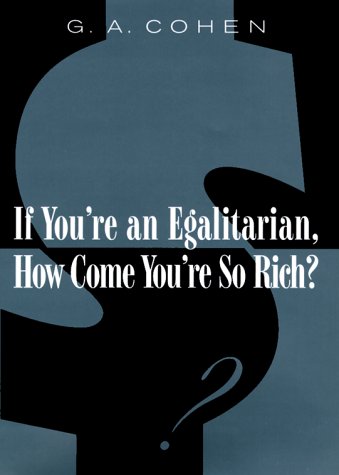 This book presents G. A. Cohen's Gifford Lectures, delivered at the University of Edinburgh in 1996. Focusing on Marxism and Rawlsian liberalism, Cohen draws a connection between these thought systems and the choices that shape a person's life. In the case of Marxism, the relevant life is his own: a communist upbringing in the 1940s in Montreal, which induced a belief in a strongly socialist egalitarian doctrine. The narrative of Cohen's reckoning with that inheritance develops through a series of sophisticated engagements with the central questions of social and political philosophy.

In the case of Rawlsian doctrine, Cohen looks to people's lives in general. He argues that egalitarian justice is not only, as Rawlsian liberalism teaches, a matter of rules that define the structure of society, but also a matter of personal attitude and choice. Personal attitude and choice are, moreover, the stuff of which social structure itself is made. Those truths have not informed political philosophy as much as they should, and Cohen's focus on them brings political philosophy closer to moral philosophy, and to the Judeo-Christian ethical tradition, than it has recently been.

G. A. Cohen was Chichele Professor of Social and Political Theory and Fellow of All Souls College, Oxford University.

These nine engaging and searching lectures, an unorthodox mixture of intellectual autobiography and philosophical argument, fall into two parts. In the first, [Cohen] describes the leading features of the Marxism in which he once believed. In the second, he explains why he remains critical of the sort of left-wing liberalism that would seem to be Marxism's natural alternative. (Ben Rogers The Observer)

Some titles carry the author's voice...Surely If You're an Egalitarian, How Come You're So Rich? does. Cohen is much the funniest living Anglophone political philosopher of any note, as well as perhaps the cleverest. Many of his best comic effects depend on the tone of voice, and some are clearly intended simply for fun. But it is always dangerous to assume that the jokes do not carry a point...[Cohen's book is] a strikingly personal address, fusing autobiography and the history of ideas with political philosophy, and ending not only with the weighty issue of how far personal attitudes must feature within the subject matter of justice itself, but with the more disconcerting question of how far the disciplines of living effectively under capitalism are bound to prove lethal for the soul...At one level, Cohen's book is largely an ingenious and agreeably frank casuistry of the ethics of professorial income management, but at another and more consequential level, it is a most imaginative deployment of personal ethical discomfort to pin down, and press home, a deep evasion at the center of this majority vision of social justice under capitalism. Its source may be merely the externalization of a private disquiet; but its force at the point of impact is as public as any philosopher could wish. (John Dunn Times Higher Education Supplement 2001-01-12)

This is an unusual book, a remarkably successful blend of autobiography, intellectual history and moral philosophy that reflects the author's distinctive outlook and background ... [It] presents, I believe, the most important contemporary challenge to the egalitarian form of liberalism...The questions he asks are the ones we should all be worrying about. (Thomas Nagel Times Literary Supplement)

It would be difficult to over-praise this wonderful book. It is profound, humane, witty, erudite, and often deeply personal. Though presented as something of an intellectual memoir, Cohen provides us with more food for thought than has been available in any book on egalitarian political philosophy in recent memory. (Daniel Weinstock Philosophy in Review)

1. If You're an Egalitarian, How Come You're So Rich?

4. IF YOU'RE AN EGALITARIAN, HOW CO

5. If You're an Egalitarian, How Come You're So Rich?