Items related to The Problem of Race in the Twenty-first Century (The...

Holt, Thomas C. The Problem of Race in the Twenty-first Century (The Nathan I. Huggins Lectures)

The Problem of Race in the Twenty-first Century (The Nathan I. Huggins Lectures) 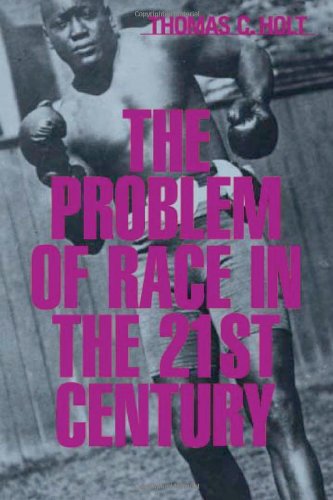 "The problem of the twentieth century is the problem of the color-line," W. E. B. Du Bois wrote in 1903, and his words have proven sadly prophetic. As we enter the twenty-first century, the problem remains--and yet it, and the line that defines it, have shifted in subtle but significant ways. This brief book speaks powerfully to the question of how the circumstances of race and racism have changed in our time--and how these changes will affect our future.

Foremost among the book's concerns are the contradictions and incoherence of a system that idealizes black celebrities in politics, popular culture, and sports even as it diminishes the average African-American citizen. The world of the assembly line, boxer Jack Johnson's career, and The Birth of a Nation come under Holt's scrutiny as he relates the malign progress of race and racism to the loss of industrial jobs and the rise of our modern consumer society. Understanding race as ideology, he describes the processes of consumerism and commodification that have transformed, but not necessarily improved, the place of black citizens in our society.

As disturbing as it is enlightening, this timely work reveals the radical nature of change as it relates to race and its cultural phenomena. It offers conceptual tools and a new way to think and talk about racism as social reality.

Thomas C. Holt is Professor of History at the University of Chicago and the author of The Problem of Freedom.

Profoundly--and by turns playfully--the insightful historian Thomas Holt juxtaposes the concepts of race, culture, and nation with the figures of Jack Johnson, Joe Louis, and Michael Jordan. His analysis nourishes the intellect as it dazzles the reader. (Nell Irvin Painter, author of Sojourner Truth)

This very stimulating series of essays provides an insightful and highly readable analysis of the historical trajectory of race and racism in the modern and postmodern eras. A provocative and cogent discussion. (Waldo E. Martin, Jr., author of The Mind of Frederick Douglass)

Thomas Holt looks at concepts of race not in narrow American black and white terms, but globally. In his view, the twenty-first century offers challenges more subtle, but scarcely less daunting than the twentieth. A book worth pondering. (William S. McFeely, author of Frederick Douglass)

One of America's major domestic problems is insightfully analyzed in this thoughtful book. Thomas Holtprovides an original framework to help us formulate a conception of race that is more appropriate for the twenty-first century. (William Julius Wilson, author of The Bridge over the Racial Divide)

Holt rightly asserts that our racial legacy should be a point of departure--not a destination--in examining the enduring nature of racial enmity. As a nation and as individuals, we must imagine ourselves beyond, while remaining aware of, those forces that are at the root of the enmity. (Vernon Ford Booklist 2001-01-01)

Readers will benefit from Holt's expert and careful examination of these narratives of contradiction and incoherence as he attempts to forecast the reigning racial ethos for the next millennium, just as W.E.B. Du Bois did when he declared that the color line was the problem of the twentieth century. Breaking from traditional paradigms, Holt...focuses on...what role it plays in the economy and in consumer culture...Holt writes in clear, precise prose...and makes an important contribution to both public and academic discussions of race and labor and their intersections in U.S. politics. (Publishers Weekly 2001-01-08)

Holt invokes W.E.B. DuBois's classic line from The Souls of Black Folk that 'the color line' was the problem of the twentieth century...Holt's Problem of Race aims a searchlight at [problems such as] how black men often serve as Rorschach tests for the self-images of white America (Michael Jordan, Colin Powell, 'Amos 'n Andy')...[His] finale is a sermonette to the coming generation to 'live as if the world...were color-blind...as if they were not 'black.' (Dale Edwyna Smith Washington Post Book World 2001-02-04)

Thomas Holt is a black University of Chicago social and cultural historian whose major work, The Problem of Freedom, is a brilliant, multifaceted account of Jamaican race, labor and politics in the nineteenth and early twentieth centuries...Holt asks...whether W.E.B. Du Bois's comment that the color line is the problem of the twentieth century remains the main question for our century. [He] addresses the issue from a global perspective on two axes: to place race in the context of both the national and global economies, and to adopt a 'global' theoretical framework of analysis that situates race historically in terms of the transformation of production regimes from early to late capitalism...in bold but sharp strokes. (Stanley Aronowitz The Nation 2001-03-12)

When in 1903 W. E. B. Du Bois said that 'the problem of the twentieth century is the problem of the color-line,' he probably did not realize he was also defining a key issue of the new millennium. Thomas C. Holt focuses on several aspects of that problem, however, such as the glorification of the black athlete and entertainer at the expense of the average black person, the loss of industrial jobs that affects black workers financially and psychologically, and the dramatic rise of a consumer society that all too often has left black citizens far behind. (Lee Milazzo Dallas Morning News 2001-04-01)

Debates about race often take the form of a mind game designed to establish whether or not a particular word or act is racially motivated...[This book] provides a compelling argument for rethinking our ideas about race. (Frank Furedi New Statesman 2001-04-23)

1. The Problem of Race in the Twenty-First Century

2. The Problem of Race in the Twenty-first Century (The Nathan I. Huggins Lectures)

3. The Problem of Race in the Twenty-first Century (The Nathan I. Huggins Lectures)

4. The Problem of Race in the Twenty-first Century (Nathan I Huggins Lectures)

5. The Problem of Race in the Twenty-first Century (The Nathan I. Huggins Lectures)

6. The Problem of Race in the Twenty-first Century (The Nathan I. Huggins Lectures) Holt, Thomas C.