Items related to The Anatomy of Prejudices

Young-Bruehl, Elisabeth The Anatomy of Prejudices

The Anatomy of Prejudices 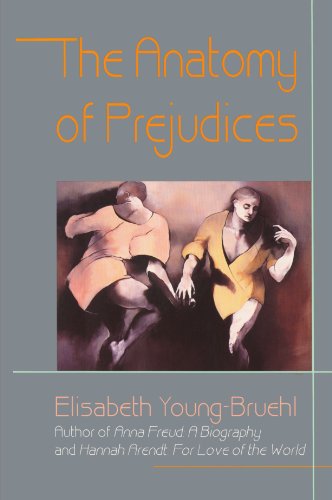 In this deeply thoughtful book, Elisabeth Young-Bruehl turns a critical lens on prejudice. Surveying the study of prejudice since World War II, Young-Bruehl suggests an approach that distinguishes between different types of prejudices, the people who hold them, the social and political settings that promote them, and the human needs they fulfill. Startling, challenging, and courageous, this work offers an unprecedented analysis of prejudice.

Elisabeth Young-Bruehl was a psychotherapist at the Institute of Pennsylvania Hospital in Philadelphia. She was the author of two well-known biographies, one of Hannah Arendt and one of Anna Freud, as well as other works including Freud on Women, Creative Characters, Mind and the Body (a collection of essays), and a novel, Vigil.

“Young-Bruehl argues that anti-Semitism, racism, sexism and homophobia differ in their internal logic (or illogic) and, more important, that they are deeply rooted in character structure and the unconscious. Accordingly, she finds the most convincing evidence about prejudices not in the questionnaires and projective tests favored by social scientists but in the writings of psychoanalysts, philosophers, novelists, critics and historians. Above all, she finds it in the writings of the victims of prejudice themselves...Her interpretations boast the familiar psychoanalytic virtues of richness, nuance and complexity: they probe to a psychological depth appropriate to the intensity and irrationality of the ideas in question...As an analysis of the sources of prejudice, The Anatomy of Prejudices is bold and profound. Along with Theodor Adorno's Authoritarian Personality, Hannah Arendt's Origins of Totalitarianism, Gordon Allport's Nature of Prejudice and Gavin Langmuir's Toward a Definition of Antisemitism, it is one of the rare studies to explore this vexed topic with the conceptual ambition and passion it deserves.”―Paul Robinson, New York Times Book Review

“Young-Bruehl is a perceptive observer. Her accounts of the preoccupations and qualities of psychological experiences that are revealed in different prejudices are useful and illuminating.”―Paul L. Wachtel, Washington Post Book World

“No subject is of more importance than that of this book...[Young-Bruehl] wants us to concentrate on the plural of the word prejudice, as she does in her title; she wants us, thereby, to think of the different kinds of hate to be found among us, the different psychological roads traveled to those diverse animosities. Such a conceptual approach requires careful psychological distinctions, and to make them, the author calls upon her thorough, nuanced knowledge of psychoanalytic thinking.”―Robert Coles, Boston Globe

“The Anatomy of Prejudices is a book of epic proportions that is sure to stimulate debate on many levels inside and outside the academy. It raises challenges to and for the social sciences, philosophy of culture, philosophy of science, studies of mind and of social development. And this is only the short list. Implications will be drawn concerning current warring groups and political agendas. Indeed, it is of such vast scope that it may invite discourse for some time to come. The goal of this ambitious study is to propose an alternative to theories of prejudice that are familiar from the social sciences...[which] tend to treat prejudice as itself a single, universal concept and to construct a general theory intended to apply to all forms of prejudice...The book exhibits the wide and deep erudition that its task demands. It critically surveys and analyzes the most influential psychological and social scientific theories that have shaped academic study and popular understanding of prejudice...The Anatomy of Prejudices is a striking achievement that may well alter profoundly the way we think of prejudices. If it provides insight into the phenomena of prejudices, it also may suggest ways of disabling or disarming them in the future.”―Rita Nolan, Washington Times

“Although this theoretically daring volume may present difficulties to readers who are not familiar with psychoanalytical theory, by integrating classical psychoanalytical concepts into the current discussion of prejudice, Young-Bruehl's challenging work serves as a provocative corrective to the perceptual illusions and superficialities spawned by the customary social scientific approach. It's a book that is sure to have enormous implications for historians, war theorists, criminologists and other scholars interested in understanding the multiple facets of various kinds of prejudice...[She] provide[s] us with a brilliant new sense of the territory and allows us to ask new questions about different kinds of prejudices and their particularly virulent modern forms.”―Susan Osborn, San Francisco Examiner & Chronicle<

“Elisabeth Young-Bruehl has written a bold and important book of comprehensive scope, and she has done so with historical and psychoanalytic sophistication. She addresses a topic of utmost concern to citizens of good will, and she treats this topic with full respect for its complexity.”―Jeffrey H. Golland, Psychoanalytic Books

“For a psychoanalyst, one of the many felicitous consequences of reading Elisabeth Young-Bruehl's impressively panoramic study is being drawn into a reconsideration of the relationship between the terms 'clinical' and 'prejudicial'. This relationship is often thought tangential. But for Young-Bruehl, it is an intimate relationship. She thinks of individual psychopathologies and socially mediated hatreds as conceptually bound...[Young-Bruehl] presents the phenomena of racisms, sexisms, homophobias and anti-Semitism mainly through the use of historical and literary texts. Her reach is extensive and compelling.”―Donald Moss, The International Journal of Psycho-Analysis

“Clearly written and accessible to general as well as scholarly readers, this is a major work in personality and culture that asserts the plurality rather than the unity of prejudice. The author...integrates psychoanalytic concepts with sociological and historical readings...Impressively erudite, [the author] knows 'how culture shapes the study of itself.' Young-Bruehl confronts a great and enduring scourge of humanity while enriching many fields. Along with new and challenging ideas, this book provides an indispensable survey of past scholarship.”―Library Journal

“Prejudice against another group is quite different from preference for one's own. Starting from this basic insight, Young-Bruehl develops a much needed inquiry of the ideologies of desire, where political theory meets psychoanalysis.”―Tzvetan Todorov, author of On Human Diversity: Nationalism, Racism, and Exoticism in French Thought

1. The Anatomy of Prejudices

2. The Anatomy of Prejudices

3. The Anatomy of Prejudices (Paperback or Softback)

4. The Anatomy of Prejudices

5. The Anatomy of Prejudices

6. The Anatomy of Prejudices

7. The Anatomy of Prejudices (Paper)

8. The Anatomy of Prejudices (Paper)