Items related to A Bed of Red Flowers: In Search of My Afghanistan

Pazira, Nelofer (INSCRIBED) A Bed of Red Flowers: In Search of My Afghanistan

A Bed of Red Flowers: In Search of My Afghanistan 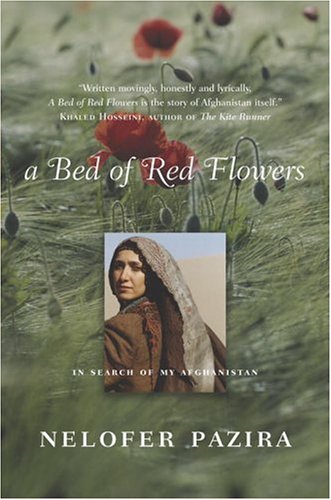 pp. 408, previous owner's sticker on fep. "This riveting memoir chronicles the physical, emotional, and spiritual odyssey of Nelofer Pazira, the star of and inspiration for the internationally acclaimed film Kandahar. As the story of Nelofer's tumultuous childhood unfolds, the reader is drawn into a world spinning wildly out of control. After the Communists assumed...

The star of the film "Kandahar creates a moving memoir of life, childhood and friendship as her world collapses around her
Nelofer Pazira was born into a privileged family living in Kabul. When she was six, the Russians invaded Afghanistan and her childhood ended. Her father, a respected doctor, was imprisoned along with family and friends. Their country became a police state and the centre of a bloody conflict between the Soviet army and the American-backed guerillas.
Amid the blood and fear of war, Nelofer's refuge from violence and anger was her friendship with Dyana. Together they shared their lives, their passion for poetry and the dangers of underground resistance.
After a decade of war, Nelofer's family escaped across the mountains to Pakistan and from there to Canada, where she continued her friendship with Dyana through letters. When her friend suddenly stopped writing, Nelofer felt bereft. Her return to Afghanistan under the Taliban and her desperate search for Dyana became the story of the internationally acclaimed film Kandahar. Her journey to discover Dyana's tragedy led her finally to Russia, to the country that destroyed her life, where she found a nation imprisoned by its own history.
Nuanced, affecting and stunningly written, A Bed of Red Flowers is a gripping portrait of ordinary life under occupation and an illuminating window onto the devastation of a country and the resilience of its people.

"For fear that the Communist government might find evidence that could be used against my father, my mother decides to burn everything. In utter anguish she sits on the floor in front of the stove. The tiny door of the chimney is open, and my motherrelentlessly feeds the beast of fire my father's books, albums and papers.
Book burning is a quiet ritual. The only sound is of the papers crackling and of my mother's sighs. The cherry-red glow of the fire highlights the lines of tiredness beneath my mother's eyes. I've never seen her so exhausted or lost. When she opens the door, the flames run like red water over the white pages, darkening their words.When we are done, we wash our chimney-hot faces as if what we had been doing were an ordinary household chore.
--excerpt from A Bed of Red Flowers

Nelofer Pazira is a journalist and filmmaker based in Toronto. She starred in the movie Kandahar and was featured in Return to Kandahar, which she also coproduced and codirected. She currently works for the Canadian Broadcasting Company's nightly newscast, The National. She has also recently set up a charity -- Dyana Afghan Women's Fund -- to provide education and skills training for women in the city of Kandahar.

1. A Bed of Red Flowers: In Search of My Afghanistan

2. A Bed of Red Flowers: In Search of My Afghanistan [Hardcover] Pazira, Nelofer (INSCRIBED)

3. A Bed of Red Flowers: In Search of My Afghanistan [Hardcover] Pazira, Nelofer (INSCRIBED)