Items related to Thunder of Erebus 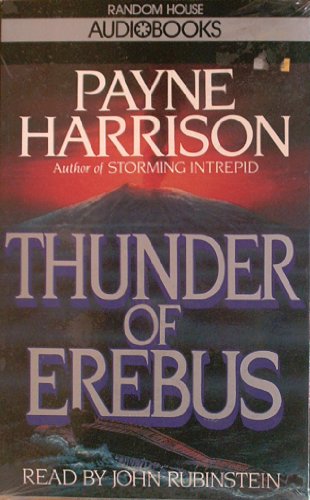 After the Cold War, in the not-too-distant future, the United States and the new Soviet Confederation come together on a joint mission in the frozen wastes of Antarctica. But deep beneath the glaciers lies a devastating discovery destined to shatter the fragile peace between East and West. And now, the coldest place on Earth is about to know the heat of the apocalyptic confrontation that neither America nor Russia ever dreamed could truly happen . . .
From the Paperback edition.

Soviet and American forces slug it out over strategic materials in the frozen South, where a dormant volcano is waking up in a terrible mood. Harrison (Storming Intrepid, 1989) shrewdly leaves the desert fighting to the real armies, taking his fighting forces to Antarctica, where a joint Soviet-American scientific project has dug up core samples rich in rubidium--an element essential to America's hypersecret new strategic defense gadget, an invisible shield that evaporates incoming missiles. Of course, no hypersecret is safe these days. The Soviets know all about the space shield, and they know that if the Americans get control of the rubidium, it is the last nail in the coffin of the Evil Empire. Cold war gets new life then as the Russians launch a sudden, fast, multiforce attack on the scientific study base in Antarctica, where the Americans are digging as fast as they can to reach the mother lode of rubidium. The Russians catch everybody except pretty volcano-scientist and former nurse Dana Harrow, who is off checking her seismographs. America doesn't take this lying down, of course, Despite the world's stupidest president, the US puts together its own multiforce counterattack, and Ms. Harrow becomes the core of the resistance movement when she teams up with a squad of sharpshooting, snow-suited, ski- borne American paratroopers. Armies, navies, and air forces collide, and everybody gets very, very cold. Living, breathing humans and fresh scenery make this a better-than-average technobattle. -- Copyright ©1991, Kirkus Associates, LP. All rights reserved.

In the near-future of this superb techno-thriller--a Literary Guild selection in cloth--the need to fuel a doomsday weapon sparks battles over a mineral deposit in Antarctica.
Copyright 1993 Reed Business Information, Inc.