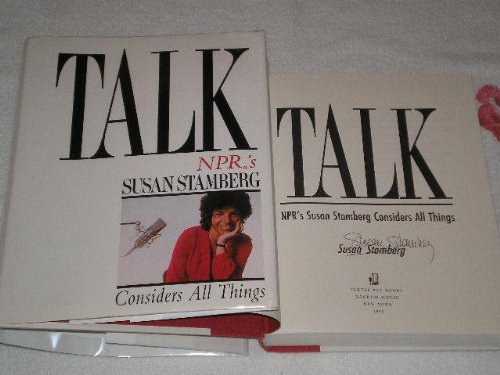 The former host of National Public Radio's "All Things Considered" presents a collection of her interviews with the world's most influential people, including James Baldwin, Robert Altman, Rosa Parks, Helen Hayes, and Georgia O'Keefe

The first woman to anchoar a national nightly news program, Stamberg brought her inimitable style to National Public Radio in 1971 and helped it grow into an influential network with a weekly audience of 15 million -- and in the process she helped transform broadcast news. Talk is a sparkling collection of her most outstanding interviews and reports, mainly for NPR's award-winning newsmagazine All Things Considered. Here are the voices that shaped the major events of two decades.

This rich collection of 85 interviews conducted by Stamberg ( Every Night at Five ) for National Public Radio's news show, All Things Considered , is a browser's delight. From 1971 to 1991, Stamberg held on-air conversations with artists, politicians, activists and others in the public eye. Here, the talks are organized by year, and each begins with an introduction--some of which occasionally run too long. Stamberg's easygoing manner is deceptive; her finely honed style soon disarms her subjects into opening up (with the exception of Nancy Reagan, whose glacial veneer even Stamberg failed to pierce). Of particular interest are the interviews with John Ehrlichman, jazz great Dave Brubeck, Rosa Parks, and Stamberg's own favorite interview--her lengthy 1977 conversation with writer Joan Didion about her work. Photos not seen by PW. Author tour.
Copyright 1993 Reed Business Information, Inc.