Items related to In Search of Lost Time, Volume 2: Within a Budding...

In Search of Lost Time, Volume 2: Within a Budding Grove (Modern Library) (v. 2) 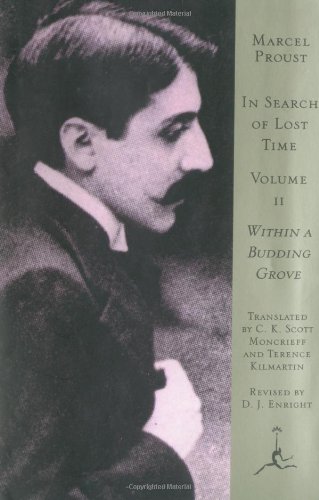 First published in 1919, "Within a Budding Grove was awarded the Prix Goncourt, bringing the author immediate fame. In this second volume of "In Search of Lost Time, the narrator turns from the childhood reminiscences of "Swann's Way to memories of his adolescence. Having gradually become indifferent to Swann's daughter Gilberte, the narrator visits the seaside resort of Balbec with his grandmother and meets a new object of attention--Albertine, "a girl with brilliant, laughing eyes and plump, matt cheeks."
For this authoritative English-language edition, D. J. Enright has revised the late Terence Kilmartin's acclaimed reworking of C. K. Scott Moncrieff's translation to take into account the new definitive French editions of "A la recherche du temps perdu (the final volume of these new editions was published by the Bibliotheque de la Pleiade in 1989).

The Modern Library of the World's
Best Books

2. In Search of Lost Time, Volume 2: Within a Budding Grove Proust, Marcel