Items related to them (Modern Library) 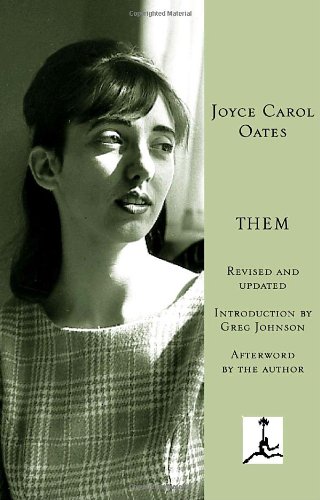 Winner of the National Book Award and in print for more than thirty years, them ranks as one of the most masterly portraits of postwar America ever written by a novelist. Including several new pages and text substantially revised and updated by the author, this Modern Library edition is the most current and accurate version available of Oates' seminal work.

A novel about class, race, and the horrific, glassy sparkle of urban life, them chronicles the lives of the Wendalls, a family on the steep edge of poverty in the windy, riotous Detroit slums. Loretta, beautiful and dreamy and full of regret by age sixteen, and her two children, Maureen and Jules, make up Oates' vision of the American fam-ily--broken, marginal, and romantically proud. The novel's title, pointedly uncapitalized, refers to those Americans who inhabit the outskirts of society--men and women, mothers and children--whose lives many authors in the 1960s had left unexamined. Alfred Kazin called her subject "the sheer rich chaos of American life." The Nation wrote, "When Miss Oates' potent, life-gripping imagination and her skill at narrative are conjoined, as they are preeminently in them, she is a prodigious writer."

In addition to the text revisions, this--new edition contains an Afterword by the author and a new Introduction by Greg Johnson, Oates' biographer and the author of two monographs on the work of Joyce Carol Oates.

"Future archaeologists equipped with only her oeuvre could easily piece together the whole of postwar America."
----Henry Louis Gates, Jr.

"[Oates'] gifts are at least equal to those of the late Flannery O'Connor. If she is not absolutely more serious than Nabokov, she is more obviously 'ours' and therefore to be taken more seriously by us. Everything she touches turns to such blistering gold that sometimes I suspect she must have had Rumpelstiltskin in to help her spin it in the night."
----R. V. Cassill

One of the most versatile and accomplished writers of our time, Oates has influenced the American literary landscape perhaps even more than we realize. The New York Times Book Review suggests, "With occasional exceptions (Joyce, Flaubert), we finally care most about novelists like Dickens, George Eliot, Balzac, Tolstoy, Hardy, James, Conrad, Lawrence or Faulkner whose work is copious enough to constitute a 'world,' and though no guarantees can be offered, energy like Joyce Carol Oates' may find an eventual reward."