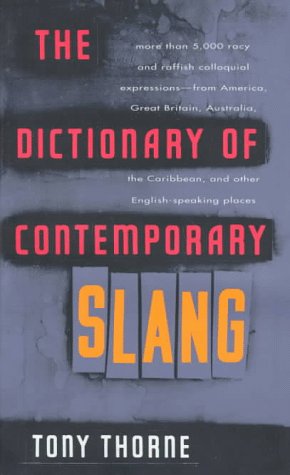 There is a linguistic riot going on the English-speaking world over, in the form of energetic, informal speech, extraordinary for its wit, quirkiness, and biting satire. The Dictionary of Contemporary Slang, the most comprehensive guide to slang, gathers more than 5,000 colloquialisms, puns, similes, metaphors, and double entendres -- from sex, drugs, and rock'n'roll; to fads, fashion, and cults; to taboos, obscenities, and euphemisms -- that have enriched our language for the past forty years. Most entries have multiple definitions that are enlivened by examples of usage.

TONY THORNE has an international reputation as linguist, lexicographer and analyst of subcultures and cultural change. Currently Director of the Language Centre and slang archive at King's College, London, he is an authority on language and culture, on which he has written, lectured and broadcast widely. His other publications include Fads, Fashions and Cults and Countess Dracula. He currently divides his time between London, Strasbourg and Slovenia, and has lived in Mexico, France, China and Eastern Europe.

Rife with ribaldry, with an amusing contrast between tart words and cool, analytical definitions, this book may mobilize the censors. A typical entry has variant spelling or wording, geographical range, meanings, and comments--often guesswork--on tone, nuance, associations, social context, history, derivation, and related words. Pronunciation is sometimes left unclear. A few slang styles, such as backslang and pig Latin, are noted. Published as the Bloomsbury Dictionary of Contemporary Slang in Britain , this work covers Britain, the United States, and Australia well, other English-speaking areas lightly. The author, a lexicographer, draws from the media and personal observation of such users of slang as hippies and Valley Girls. Recommended more as a fun reflection of speech in recent decades than as definitive scholarship.
- William A. Donovan, Chicago P.L.
Copyright 1991 Reed Business Information, Inc.