Items related to Mystic Chords of Memory: The Transformation of Tradition...

Kammen, Michael Mystic Chords of Memory: The Transformation of Tradition in American Culture

Mystic Chords of Memory: The Transformation of Tradition in American Culture 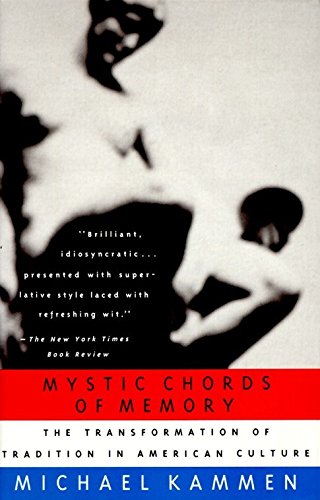 "Illustrated with hundreds of well-chosen anecdotes and minute observations . . . Kammen is a demon researcher who seems to have mined his nuggets from the entire corpus of American cultural history. . . . Insightful and sardonic."—Washington Post Book World

In this groundbreaking, panoramic work of American cultural history, the Pulitzer Prize-winning author of A Machine That Would Go of Itself examines a central paradox of our national identity. How did "the land of the future" acquire a past? And to what extent has our collective memory of that past—as embodied in our traditions—been distorted, or even manufactured? Ranging from John Adams to Ronald Reagan, from the origins of Independence Day celebrations to the controversies surrounding the Vietnam War Memorial, from the Daughters of the American Revolution to immigrant associations, and filled with incisive analyses of such phenonema as Americana and its collectors, "historic" villages and Disneyland, Mystic Chords of Memory is a brilliant, immensely readable, and enormously important book.

"This is a big, ambitious book, and Kammen pulls it off admirably. . . . [He] brings a prodigious mind and much scholarly rigor to his task. . . . An important book—and a revealing look at how Americans look at themselves."—Milwaukee Journal

MICHAEL KAMMEN, the Newton C. Farr Professor of American History and Culture at Cornell University, was a president of the Organization of American Historians. He was the author or editor of numerous works, including People of Paradox: An Inquiry Concerning the Origins of American Civilization, which won the Pulitzer Prize for History, and A Machine That Would Go of Itself: The Constitution in American Culture, awarded the Francis Parkman Prize and the Henry Adams Prize. Kammen lectured throughout the world. He died in 2013.

An ambitious, wonderfully detailed investigation into the shifting perceptions of American cultural identity from Pulitzer Prize-winner (People of Paradox, 1973) Kammen (American History and Culture/Cornell; A Machine That Would Go of Itself, 1986, etc.). Taking his title from Lincoln's First Inaugural Address plea for national unity, Kammen asserts that, particularly in times of upheaval, ``a usable past has been needed to give shape and substance to national identity.'' Thus, the broad chronological division of the book into three postwar periods: 1870-1915, when the trauma of civil war and an influx of immigrants made history a mechanism for social and political unification; 1915-45, during which time the tensions of memory and modernism, populism and elitism, combined to forge a uniquely American aesthetic; and 1945- 90, an era of ``amnesia'' encompassing an intense interest in things historical and a shocking lack of specific knowledge. Throughout, the author masterfully untangles the threads of myth, tradition, and nostalgia underlying the curious ``ambiguities and dualisms'' of a nation stubbornly devoted to both past and future vision. Hence, there arose such very American anomalies as Henry Ford following up his transformation of working life and leisure (and his oft-quoted remark that ``History is more or less bunk'') with obsessive collecting and the creation of two ``living'' museums. Splendidly inclusive in the best, most delightful vein of intellectual history, in which no cultural artifact is discounted as trivial, Kammen's study offers a liberal sampling of high and low culture--literature and popular reading material; pageants and parades; art, architectural, and design trends; museums, theme parks and monuments--as well as a nice dollop of historiography and a careful consideration of similar movements abroad. Admirable, perceptive, and refreshingly well balanced--a daunting task superbly accomplished. (One hundred and forty-five illustrations--not seen.) -- Copyright ©1991, Kirkus Associates, LP. All rights reserved.

1. Mystic Chords of Memory : The Transformation of Tradition in American Culture

2. Mystic Chords of Memory: The Transformation of Tradition in American Culture

Book Description Vintage February 1993, 1993. Trade. Condition: New. We can't leave this one alone -- it's a sizable volume and the lilt of the title made us want to know what Pulitzer prizewinner, Michael Kammen, intends to get at. So here's the gist as far as telling goes: a nation is nothing without the traditions that create it. These traditions form our history, acting both as foundation and living presence for contemporary society. But tradition is not a static or rigid formula. We simultaneously live within it, react against it and completely ignore it. Sometimes it is no more than an idea we elevate as we settle into a comfortable status quo. Michael Kammen charts this course of the American memory through a series of historic periods: prior to 1870, circa 1870-1915, 1915-1945 and 1945-1990. Here's a brilliant researcher willing to expose every ambiguity and amnesia he can find to sort the thing through. This kind of remembrance shows us a way to think about the past and reestablishes our existence in the realm of paradox, within the painful tensions necessary for transformation. Seller Inventory # 20071001124295

3. Mystic Chords of Memory: The Transformation of Tradition in American Culture

4. Mystic Chords of Memory: The Transformation of Tradition in American Culture

5. The Mystic Chords of Memory: The Transformation of Tradition in American Culture