Items related to Spider Kane and the Mystery at Jumbo Nightcrawler's

Spider Kane and the Mystery at Jumbo Nightcrawler's 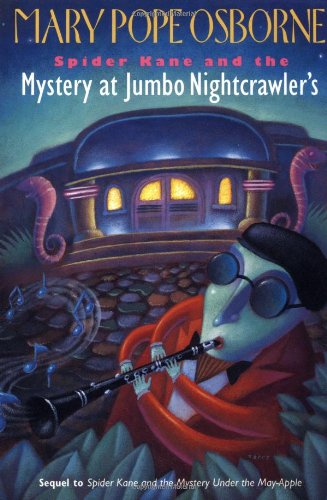 Spider Kane and Leon Leafwing are back. This time someone has kidnapped all their friends and even Leon's mom! It will take all of Spider Kane's vast talents and some super sleuthing from Leon to figure this one out. Middle grade mystery fans will love investigating this book from favorite Mary Pope Osborne. A brand new cover gives this reissue a fresh new look!

Mary Pope Osborne is the award-winning author of over forty books for young people, including the Magic Tree House series,  American Tall Tales, Favorite Greek Myths, and One World, Many Religions, an Orbis Pictus Honor Book. She recently completed two terms as president of the Authors Guild, the leading writers' organization in the United States. She lives in New York City with her husband, Will, and their Norfolk Terrier, Bailey. They also have a cabin in Pennsylvania.

Grade 2-4-- Spider Kane is an insect detective extraordinaire. He has gathered a crew of followers under the "Order of the MOTH" (Mission: Only To Help). His lieutenants have been sent a letter summoning them to a secret meeting at the Jumbo Nightcrawler's jazz club on the waterfront. Events unfold rapidly. The golden treasure of the ants disappears, and Mimi Butterfly and La Mere Leafwing are kidnapped. Walter Dogtick and Leon Leafwing are frantic. At last, Spider Kane, intrepid veteran of the Mosquito Wars, appears to lead the remaining MOTH crew in a dangerous venture back to the waterfront. Villainous Saratoga D'Bee summons her henchmen, the sinister hornets, but in the end they prove no match for the keen wits of Spider Kane. Puns, quips, and imaginative language enliven this chapter book; clues to the mystery abound. This title follows Spider Kane and the Mystery under the May-Apple (Knopf, 1993), but it can stand alone .
-Ruth Semrau, Lovejoy School, Allen, TX
Copyright 1993 Reed Business Information, Inc.

1. Spider Kane and the Mystery at Jumbo Nightcrawler's

2. Spider Kane and the Mystery at Jumbo Nightcrawler's