Items related to The Un-Wedding 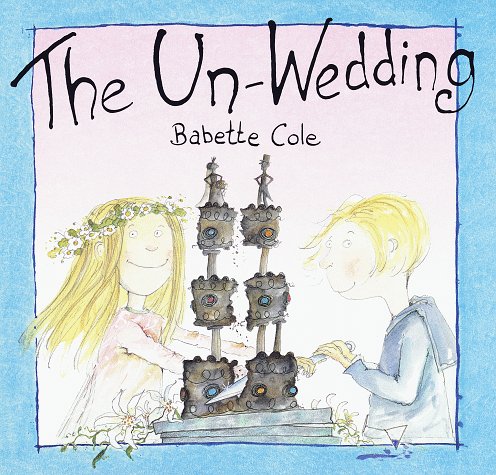 From the creator of the hilarious Dr. Dog and Drop Dead and the refreshing Mummy Laid an Egg  comes a lighthearted yet helpful introduction to the difficult topic of divorce for children. Demetrius and Paula Ogglebutt have problem parents who never agree about anything and play childish tricks on each other. After calling a meeting at school for anyone with problem parents, the beleaguered brother and sister discover they are far from alone. Join Demetrius and Paula as they orchestrate the perfect solution for their bickering parents, proving that divorce can be a good thing for all concerned--not least of all the kids.

Cole is not the shy type. Her Drop Dead cheerfully explored mortality, and her Bad Good Manners Book took a dubious view of etiquette. This picture book, whose cover shows a boy and girl slicing a black-frosted wedding cake down the middle, tells readers that certain couples are happier apart. "Demetrius and Paula Ogglebutt were two perfectly beautiful children... but... they had two problem parents who could never agree about anything." Diagrams of the family manor, offering peeks into every window, show crazy in-laws, odd pets and dissimilar artistic tastes inspiring ugly fights. Inside the Ogglebutt estate, the Mr. and Mrs. glare at one another down a long supper table and devise cruel pranks ("She hid a present from one of his cows in his cap! And he boiled her underwear until it shrank!"). The blond and angelic Paula and Demetrius blame themselves. But when they call a meeting at school for "anyone with problem parents," a horde arrives. Cole reassures her audience that adults sometimes act "like five-year-olds." Yet her giddy response, an "un-wedding" performed by an agreeable minister and followed by "separate un-honeymoons," does not adequately solve the Ogglebutts' dilemma. In a fanciful finale, the siblings build side-by-side houses for their parents, "connected by a secret tunnel." Such a solution works metaphorically, but Cole denies the worry and confusion that attend separation. She never once uses the word "divorce." Ages 6-12.
Copyright 1998 Reed Business Information, Inc.

Demetrius and Paula Ogglebutt have a problemtheir parents. Their mother and father can't agree about anything and their stand-off is approaching all out war. Mr. Ogglebutt puts cement in Mrs. Ogglebutt's bath salts; she puts fireworks in his sausage and mashed potatoes. He puts wigglers in her mudpack; she puts a cow pie in his cap. The uglier their feelings for each other, the uglier they look. Demetrius and Paula are miserable until they come up with a wonderful planthey ask the minister to un- marry their parents. ``What a clever idea,'' he says, and their parents wonder why they didn't think of it themselves. A lovely un-wedding ensues, with the beaming un-couple and guests all in black. While the two honeymoon separately, the children demolish the baronial estate and build two houses, one for each parent, connected by a secret tunnel that only children can crawl through. They order two of everything they want and everyone lives ``happily ever afterapart.'' Cole (Drop Dead, 1997, etc.) proves again that humor is the best medicine; this tongue-in-cheek take on divorce won't prevent children from suffering on their own warring home fronts, but casts the process of separating in a light that may cheer them. Loosely drawn line-and-watercolor illustrations portray the bickering couple in hilarious detail, made all the funnier by the posh British backdrop that is their battleground. (Picture book. 6-12) -- Copyright ©1998, Kirkus Associates, LP. All rights reserved.