Items related to Encyclopedia of the Renaissance

Encyclopedia of the Renaissance

Encyclopedia of the Renaissance 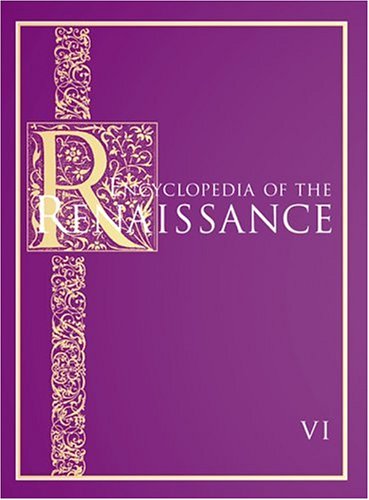 Encyclopedia of the Renaissance (6 Volume Set)

Encyclopedia of the Renaissance is the most recent publication in Scribner's world history program, which includes Dictionary of the Middle Ages (1982-89), Civilization of the Ancient Mediterranean (1988), and Civilizations of the Ancient Near East (1995), a Dartmouth Medal winner. Following the model of its predecessors and its editor's "broad vision" for the work, Encyclopedia of the Renaissance (ER) successfully draws together articles on "the entire cultural movement and period of history called the Renaissance." The first comprehensive, multivolume encyclopedia on the topic, ER is intended to be useful to a variety of readers, including high-school students and general readers, college students, and scholars exploring topics outside their own areas of specialization.

ER was published in association with the Renaissance Society of America, "the leading organization in the Americas for the interdisciplinary study of the late medieval, Renaissance and early modern period" and publisher of Renaissance Quarterly. The editor in chief is Paul F. Grendler, author of several books on printing and publishing during the period. Grendler was assisted by 12 associate and 2 consulting editors, all from departments of history, art, language, philosophy, Judaica, or Renaissance studies in major universities in the U.S. and Canada. ER contains 1,200 alphabetically arranged, signed articles written by 683 scholars, whose affiliations are listed in the last volume of the set. Approximately three-quarters of the contributors are from academic institutions, museums, or libraries in the U.S. and Canada. Most of the remaining contributors are from similar institutions in Australia, Europe, Israel, South Africa, and the United Kingdom.

In his introduction, Grendler provides a working definition of the Renaissance as "a series of intellectual, artistic, political, and social initiatives that began in Italy around 1350 [and] spread to the rest of Europe and to the wider world. These innovations had an enduring influence on modern civilization. The humanists and other men and women of the era believed that they were giving birth to a new age. They called it a renaissance, because they saw their own age as a rebirth of the best of the ancient world." Like Dictionary of the Middle Ages, the articles in ER address all aspects of life during the period, including the arts, culture, economics, humanism, literature, philosophy, politics, religion, science, social history, and women's roles. The set also includes biographies of about 600 individuals and 26 families (e.g., Habsburg dynasty; Medici, House of). Chronological coverage "begins in Italy in approximately 1350, then broadens geographically to embrace the rest of Europe in the middle to late fifteenth century," ending in the mid-seventeenth century, when "transformations of various monarchies . . . ushered in a new period in European political history." The geographic scope includes all of Europe and "also the larger world as Europeans encountered it through exploration, trade, and colonization."

Articles range from Absolutism to Zoology, encompassing subjects as varied as Alchemy, Food and drink, Grand tour, Piracy, Printing and publishing, and Tournaments. Length is from one-half page (many of the biographies) to nearly 50 pages (Renaissance). Longer, composite entries (Art, Drama, Renaissance) group together more specialized, related articles, each with its own heading and occasionally separate authors and bibliographies. For example, Renaissance includes "The Renaissance in Historical Thought," "The English Renaissance in Literary Interpretation," "The Renaissance in Popular Imagination," "Influence of the Renaissance," and "Renaissance Studies."

Articles sampled were well-written, authoritative, and generally fascinating, offering a unique focus on topics that can be found in general or specialized encyclopedias (e.g., Espionage, Popular culture, Prostitution, Sports). Many include features that contribute to their clarity and appeal to a diverse audience; for example, they usually begin with clear definitions of their topics. Piracy is "larceny on or by descent from the sea"; and Pilgrimage is a "physical journey from a person's normal residence to a site that the person considers sacred." Articles longer than a page or two include boldface subheadings that make it easy to pick out items of interest. For example, Plague includes headings enabling readers to pinpoint discussions of recurrent plague and the history of disease, demographic studies of recurrent plague, and plague and public health. A number of articles include a final section placing the topic in the context of the Renaissance, especially if the connection is not obvious. Plague includes a section entitled "Social and Cultural History of Plague in the Renaissance"; Arms and armor includes a discussion of "The Role of Arms and Armor in Renaissance Society." Many treatments are surprisingly and deliciously contemporary, including a list of film versions of Shakespeare's plays and discussion of the use of the term "Renaissance Man" as a selling point in personal ads (both found in "The Renaissance in Popular Imagination" section within the Renaissance article). With a few dry exceptions, writing strikes a careful balance between scholarly and breezy style. The set is irresistibly conducive to browsing, and quotable passages continued to surface during review, such as the revelation that the word quarantine comes from the practice of requiring a waiting period of 40 days for foreign ships arriving at the port of Ragusa, Italy, to see if any of the passengers developed plague symptoms (Plague); or the fact that the Spanish writer Miguel de Cervantes Saavedra was held hostage by pirates from 1575 to 1580 (Piracy). Cross-references direct readers to related entries.

Selective bibliographies complete each article. When appropriate, bibliographies are divided according to primary sources, secondary sources, and topics. Primary sources are usually modern editions in original languages or English translation. Secondary sources include "the most important scholarly works in any language, plus the most useful works in English." Most sources are in English or western European languages and published in the 1970s through the late 1990s. There are also older classics and a relatively small number of periodical articles. Some articles include references within the text. Inexplicably, some bibliographies are annotated, while others are not, and publishers' names are not included in the citations

The Board noticed a few flaws, such as the failure of the section "Women Artists" within the article Art to mention the important painter Artemesia Gentileschi or refer to the biographical entry on her, although she is in the public eye as the subject of several recent books, articles in magazines like Newsweek, and a catalogue raisonnepublished by Penn State University Press. The generally excellent article Piracy refers to "Barbary corsairs" without explaining the difference between corsairs and pirates; the same article refers to an intriguing "Black Legend" without explaining it.

ER includes 750 black-and-white illustrations. In many cases, Renaissance artwork illustrates topical entries. For example, Albrecht Durer's famous engraving of a rhinoceros illustrates Zoology, and a "sixteenth century depiction of women of the street and a pimp" from the Musee d'Art et d'Histoire in Geneva enlivens Prostitution. Each volume also includes a color frontispiece and an eight-page insert of full-color, captioned illustrations. Thirty-five crisply delineated maps include countries, cities, and regions, such as Burgundy. Other features include a chronology, which extends from 1300 to 1724. A "Topical Outline of Contents" lists articles according to a conceptual framework divided into "Contexts," "Thought," "Art," "Literature," "Places," "Events," "Biographies," and "Study of the Renaissance." Each of these categories is further divided, with individual articles listed under each subdivision. The topical outline provides readers with yet another mechanism for locating related articles.

There are a number of one-volume reference sources on the Renaissance, including Cultural Atlas of the Renaissance (Prentice Hall, 1993) and Encyclopedia of the Renaissance (Facts On File, 1987). Although these titles may remain the only option for very small collections, ER goes far beyond them in scope, length of articles, and the comprehensiveness of its interdisciplinary approach. It is an essential purchase for all academic libraries, larger public libraries, art collections, and libraries of high schools with strong programs in history and art.

This new six-volume reference work will prove to be an indispensable resource on any topic imaginable (from cooking methods to midwifery) in Renaissance studies. Grendler (history, Univ. of Toronto) has assembled nearly 1200 clearly written articles of varying length by over 600 international contributors. Designed to be of use to both student and scholar, the articles cover the period from approximately 1350 to the eve of the 30 Years' War in 1618, treating the Renaissance as both a specific period in history and as a cultural movement. Editor Grendler believes that the Renaissance was marked by great social and cultural unity within Europe, a unity that Europeans would not experience again until the late 20th century. The articles reflect three modern trends in Renaissance studies: a recognition of the humanism that underlay the informed thought of the period, a close look at the fundamental social conditions of all classes of Renaissance society, and a consideration of women's roles during the Renaissance. Each alphabetically arranged entry includes a bibliography, and an index and chronology are included. One color plate is found at the beginning of each volume, while the rest of the 750 illustrations are in black and white. Although expensive, this reference will serve lay readers, students, and scholars. Highly recommended for academic libraries with significant holdings in Renaissance history and for larger public libraries [See also "Best Reference Sources 1999," p. 54.--Ed.].--Robert J. Andrews, Duluth P.L., M.--.
-Robert J. Andrews, Duluth P.L., MN
Copyright 2000 Reed Business Information, Inc.

1. Encyclopedia of the Renaissance

2. Encyclopedia of the Renaissance