Items related to Bowling Alone: The Collapse and Revival of American...

Bowling Alone: The Collapse and Revival of American Community 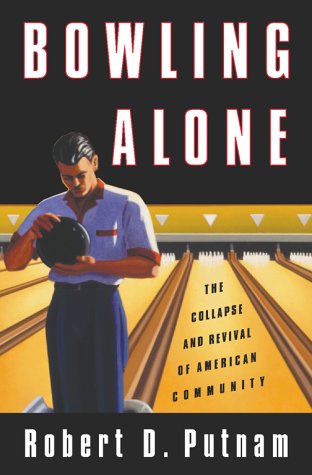 Shows how changes in work, family structure, age, women's roles, and other factors have caused people to become increasingly disconnected from family, friends, neighbors, and democratic structures--and how they may reconnect.

Few people outside certain scholarly circles had heard the name Robert D. Putnam before 1995. But then this self-described "obscure academic" hit a nerve with a journal article called "Bowling Alone." Suddenly he found himself invited to Camp David, his picture in People magazine, and his thesis at the center of a raging debate. In a nutshell, he argued that civil society was breaking down as Americans became more disconnected from their families, neighbors, communities, and the republic itself. The organizations that gave life to democracy were fraying. Bowling became his driving metaphor. Years ago, he wrote, thousands of people belonged to bowling leagues. Today, however, they're more likely to bowl alone:

Television, two-career families, suburban sprawl, generational changes in values--these and other changes in American society have meant that fewer and fewer of us find that the League of Women Voters, or the United Way, or the Shriners, or the monthly bridge club, or even a Sunday picnic with friends fits the way we have come to live. Our growing social-capital deficit threatens educational performance, safe neighborhoods, equitable tax collection, democratic responsiveness, everyday honesty, and even our health and happiness.

The conclusions reached in the book Bowling Alone rest on a mountain of data gathered by Putnam and a team of researchers since his original essay appeared. Its breadth of information is astounding--yes, he really has statistics showing people are less likely to take Sunday picnics nowadays. Dozens of charts and graphs track everything from trends in PTA participation to the number of times Americans say they give "the finger" to other drivers each year. If nothing else, Bowling Alone is a fascinating collection of factoids. Yet it does seem to provide an explanation for why "we tell pollsters that we wish we lived in a more civil, more trustworthy, more collectively caring community." What's more, writes Putnam, "Americans are right that the bonds of our communities have withered, and we are right to fear that this transformation has very real costs." Putnam takes a stab at suggesting how things might change, but the book's real strength is in its diagnosis rather than its proposed solutions. Bowling Alone won't make Putnam any less controversial, but it may come to be known as a path-breaking work of scholarship, one whose influence has a long reach into the 21st century. --John J. Miller About the Author:

Robert D. Putnam is the Peter and Isabel Malkin Professor of Public Policy at Harvard University and founder of the Saguaro Seminar, a program dedicated to fostering civic engagement in America. He is the author or coauthor of ten previous books and is former dean of the John F. Kennedy School of Government. He lives in Cambridge, Massachusetts.

1. Bowling Alone: The Collapse and Revival of American Community

2. Bowling Alone: The Collapse and Revival of American Community

3. Bowling Alone: The Collapse and Revival of American Community

4. Bowling Alone: The Collapse and Revival of American Community