Items related to YOUNGER AT LAST: The New World of Vitality Medicine

YOUNGER AT LAST: The New World of Vitality Medicine 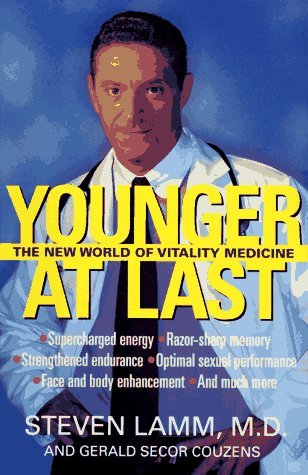 A physician and the author of Thinner at Last recommends a health program comprised of a variety of prescription and over-the-counter drugs to increase energy, alertness, and vitality in both the mind and the body. 100,000 first printing. Tour.

In a youth-obsessed world, Dr. Steven Lamm has a rather bold idea: that men and women between 35 and 65 are at the top of their mental, physical, and creative powers. His book promotes what he calls "vitality medicine," which involves using everything legally at your disposal to look and feel at your peak, rather than simply piqued. He's big on strength training, vitamin supplementation to improve memory, a new technique called endermologie to reduce cellulite, the antioxidant pycnogenol and a host of other products and procedures most people haven't heard of yet. It's intriguing reading, especially for those wondering just how quietly to head into the night.

The new world of Vitality Medicine introduces a breakthrough program that will forever reverse the punishing effects of a leaner and meaner world where younger is better, where a sharp memory is your best weapon, where fatigue is your constant enemy, and where illness is something you'd better not develop.

For the first time, a widely respected medical practitioner and professor of medicine responds to what members of his own generation are seeking, a comprehensive program not just for fixing what's broken, but for improving what still functions. In Younger at Last, preeminent New York internist Steven Lamm introduces his revolutionary Vitality Medicine program to a new culture where hard-earned success in work life and private life is increasingly linked to the attributes of youthfulness. Dr. Lamm has already helped thousands of patients, and he understands the needs of people in their late thirties through early sixties who have to compete and stay competitive in every arena of their lives for a longer period of time than any prior generation.

Simple and easy to understand, Dr. Lamm's message is communicated with his trademark gift for making complex ideas accessible. Millions will relate to his original and life-affirming ideas. He emphasizes that his program is not for people who need rehab after a stroke or heart attack; it is for those who never want to have to worry about that possibility. It is not for those who have given up on sex; it is for people too stressed out to enjoy it. Here at last are cutting-edge medical answers to the everyday sexual complaints of an entire generation.

Memory enhancement, essential to the maintenance of everyone's competitive edge, is another concern. With the help of powerful new combinations of mind-enhancing "nootropic" vitamins, herbs, and amino acids, you'll be able to sustain and even surpass your performance in the workplace and beyond. And since looking great has dramaticimplications in today's competitive world, you can follow Dr. Lamm's prescription for achieving a body as taut as a Speedo model's and a face as youthful as one in a perfume commercial.

Best of all, though, is the fact that this remarkable book introduces a mainstream program that is trustworthy and easily incorporated into everyday routines. Fully corroborated by the latest medical research, Dr. Lamm's recommendations are both up-to-the-minute and safe. And most important, they work.

Steven Lamm is himself the best testimony to his own philosophy. He has personally tested or followed all the prescription and over-the-counter drug recommendations in this book. At 49, he is trim, athletic, and bursting with energy that matches his fervor for Vitality Medicine. Now you can follow him into the world of Younger at Last.

1. YOUNGER AT LAST: The New World of Vitality Medicine