Items related to A Line In The Sand: The Alamo in Blood and Memory

Roberts, Randy; Olson, James S. A Line In The Sand: The Alamo in Blood and Memory

A Line In The Sand: The Alamo in Blood and Memory 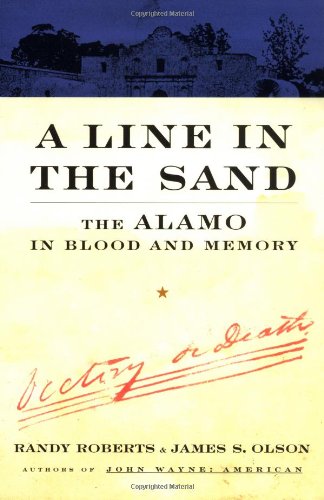 Randy Roberts is professor of history at Purdue University. He is the author of Papa Jack: Jack Johnson and the Era of White Hopes and the co-author (with James Olson) of John Wayne: American. Both books are published by The Free Press. He lives in Lafayette, Indiana.

Perhaps Travis and a few others had some vague sense that something was different when they were awoken early on February 23 by the sound of horses and wagons and Spanish voices drifting down the streets of the town and heading toward the open country to the north and east. Tejano Béxar was on the move in much greater volume than before, and the creaking carts, lowing oxen, and neighing horses made it hard to miss. Those with carts had them packed full; those on foot carried supplies on their shoulders. Although Travis had other concerns to occupy his attention, he was troubled by the rapid and unexpected exodus. He had his soldiers detain a few peripatetic stragglers for questioning.

He asked some where they were going, and they answered evasively, talking about the need to begin spring planting. Unsatisfied, Travis had a few arrested, but that tactic also failed to loosen their tongues. Finally, Nathaniel Lewis, a local merchant, told Travis what every Tejano seemed to know: a Mexican army had been sighted at León Creek, less than eight miles southwest of Béxar. They were coming, and the Tejanos had been warned. Exactly how and by whom was uncertain. José María Rodríguez, a child in 1836, long afterward recalled that early in the morning of February 23 a man named "Rivas called at our home and told us that he had seen Santa Anna in disguise the night before looking in on a fandango on Soledad Street." Rodríguez's father was away "with General Houston's army," but his mother made the decision to bury their money in the clay floor of their home, pack their goods into oxcarts, and go to the ranch of Doña Santos Ximénes.

Rodríguez's memories, though seventy-five years after the event, probably faithfully captured the mood of Béxar that morning. Rumors of Santa Anna sighting, always inaccurate, mixed with reports of the size of the army, always exaggerated. Added together they equaled fear. Any unrecognized man in a poncho and a broad-brimmed hat might be Santa Anna, and an army of ten thousand, fifteen thousand, twenty thousand, or more was on the outskirts of town. Remember what happened in Zacatecas the year before, or after the 1813 insurrection in Béxar itself. If the army was coming, local wisdom dictated that every resident of Béxar should scurry out of harm's way.

At first Travis was unconvinced, but after a few more reports he took precautions. Accompanied by John Sutherland and a few other men, Travis climbed to the belfry of the San Fernando Church between the Main Plaza and the Military Plaza and squinted toward the southwest. Nothing. But to be on the safe side he posted a reliable man as a sentinel with orders to ring the bell if he spied the enemy. Hours passed. Travis looked after other affairs. Then in the early afternoon the bell clanged wildly. Once again Travis scaled to the top of the square tower, glared out into the sun, and saw nothing save a wide prairie broken by patches of mesquite and thickets of chaparral. But the sentinel insisted that he had seen Mexican soldiers out there in the direction of the sun. They had simply disappeared in the bushwood.

Sutherland wanted to ride out and take a look, and Travis agreed that he should take John W. Smith, a local carpenter who knew the country, and reconnoiter the area along the Laredo Road. Sutherland told Travis if "he saw us returning in any other gait than a slow pace, he might be sure that we had seen the enemy."

If Sutherland and Smith took the Laredo Road, they rode directly south. At the same moment, the vanguard of Santa Anna's army was approaching Béxar from the southwest. The night before, the Vanguard Brigade under General Joaquín Ramírez y Sesma had camped along the Alazon Creek, above which a ridgeline afforded the view of the entire San Antonio River Valley. There he could only watch the heavy rains foil hopes of taking the town unprepared. Santa Anna would later write that had the surprise attack taken place it "would have saved the time consumed and the blood shed later in taking of the Alamo."

Crossing over the crest of the slope, Sutherland and Smith got a good look at what the sentinel had seen only at a distance. There must have been fifteen hundred soldiers, Sutherland later remembered, "their polished armor glistening in the rays of the sun, as they formed in a line between the chaparral and the mesquite bushes." In 1836 Mexican soldiers were not wearing breastplates, so no armor glistened in the sun, but Sutherland did not spend much time looking. He and Smith wheeled their horses and spurred north. In a moment, however, Sutherland was on the ground. His horse had slipped in the mud, thrown him, and rolled on top of his leg. Smith helped his dazed companion back onto the saddle and they rode hard into Béxar.

The confirmation that the Mexicans were coming in force sent another wave of panic through the town. Travis ordered his men to cross the San Antonio River and take cover in the Alamo. Herding cattle before them and raiding jacales -- poor people's shacks -- along the way for corn and supplies, they moved in an orderly fashion toward the old mission. Juan Seguín, one of the Tejano revolutionary leaders, recalled that as the Texans walked east on Potero Street toward the river, women stood by watching and exclaiming, "Poor fellows you will all be killed, what shall we do?"

Travis was wondering the same thing. He had a force of about 150 men, a loose collection of volunteers and regular army, under the joint command of himself and Bowie. In his group were colonels, captains, lieutenants, and sergeants -- designations that were hardly based on any sort of education or training. In truth, he had a body of men, a group of patriots and adventurers, among whom were some natural leaders like David Crockett, James Bowie, Juan Seguín, William C. M. Baker, and William Blazeby, but none were experienced officers.

Even more than officers, Travis needed men, and he needed them fast. Seeing that Sutherland was too injured from his fall to be of much use, at 3 P.M. Travis penned a hasty note to Andrew Ponton in Gonzales and sent him off with it. "The enemy in large force is in sight," he wrote. "We need men and provisions. Send them to us. We have 150 men and are determined to defend the Alamo to the last. Give us assistance." Later he wrote a similar note to James Fannin in Goliad, promising to "make such a resistance as is due to our honour, and that of the country, until we can get assistance from you, which we expect you to forward immediately." It was an urgent message, more an order than a request. Travis, determined "never to retreat," deemed "it unnecessary to repeat to a brave officer, who knows his duty" that he needed help, but he wrote it nonetheless.

While the Texans occupied the Alamo, Santa Anna's Vanguard Brigade marched into Béxar. "I will never forget how that army looked as it swept into town," Juan Díaz recalled. "At the head of the soldiers came the regimental band, playing the liveliest airs, and with the band came a squad of men bearing the flags and banners of Mexico and an immense image that looked like an alligator's head." Thousands of Mexican soldiers had moved into Béxar that afternoon, and what they saw confirmed the rebellious nature of the Texans. Above the Military Plaza, and then the Alamo, flapped a tricolor flag with two stars. The stars represented Coahuila and Texas, and the flag signified that the Texans were in rebellion against Santa Anna's violations of the Mexican constitution. Answering flag with flag, Santa Anna ordered a blood red flag raised on the bell tower of the San Fernando Church, a mere thousand yards from the Alamo. In the center of the flag were the skull and crossbones. The flag meant no quarter, no surrender, no mercy -- death for every man who opposed the Mexican government. The Texas rebels, Santa Anna believed, were filibusterers, pirates, and traitors, not soldiers of an established nation, and would be treated accordingly.

The Texans inside the Alamo responded to the flag with a blast from their eighteen-pounder. If Santa Anna wanted a battle without quarter, then so be it. The Texans were ready, just as they had been a few months before when Cos occupied the Alamo. The ball landed harmlessly in the town, raising dust and hurting no one, but the action was an eloquent note of defiance. Santa Anna answered fire with fire. Two Mexican howitzers rained four grenades toward the Alamo. Several shells exploded inside the fort but did no real damage. From inside the Alamo a new flag stretched above the west wall. A white flag. The Texans wanted to talk. Santa Anna responded by ordering a parley sounded.

Talk, yes -- but about what? Both Texans and Mexicans were confused about the exact order of the opening sequence of events. Did the Texans fire first, or did the Mexicans? Was the red flag misinterpreted? Had Santa Anna sounded a parley during engagements, or even before the first shot? Someone inside the Alamo told Bowie that he distinctly heard the notes of a parley, and Bowie ripped a page out of a child's copybook and scribbled a hurried message to Santa Anna asking for clarification. "I wish, Sir, to ascertain if it be true that a parlay was called, for which reason I send my second aid, [Green B.] Benito Jameson, under guarantee of a white flag which I believe will be respected by you and your forces." "Dios y Mexico," he ended his note, but after second thoughts he crossed it out and penned, "God and Texas!" Though ill and in a ticklish military situation, he still wanted Santa Anna to know that he was not a man to bend. "God and Texas" said it nicely.

Santa Anna was above answering a rebel. He refused to meet -- let alone negotiate with -- Jameson. Instead, he instructed aide-de-camp Colonel José Batres to answer Bowie. "I reply to you, according to the order of his Excellency, that the Mexican army cannot come to terms under any conditions with rebellious foreigners to whom there is n...

1. A Line In The Sand: The Alamo in Blood and Memory

2. A Line In The Sand The Alamo in Blood and Memory

3. A Line In The Sand: The Alamo in Blood and Memory

4. A Line In The Sand: The Alamo in Blood and Memory

5. A Line In The Sand: The Alamo in Blood and Memory

7. A Line In The Sand: The Alamo in Blood and Memory Roberts, Randy and Olson, James S.