Items related to The Crisis of the Negro Intellectual

The Crisis of the Negro Intellectual

The Crisis of the Negro Intellectual 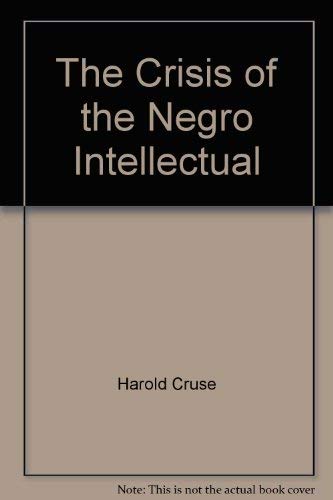 First published in 1967 in the wake of race riots and integration fears, The Crisis of the Negro Intellectual is an indispensable history and urgent critique of the black left from the Harlem Renaissance through the black arts movement. Memorably portraying prominent figures such as Paul Robeson, Lorraine Hansberry, and James Baldwin, Harold Cruse tells of African American artists yoked to rigid doctrines that doom them to political and artistic failure. He then sweeps out from Harlem cultural institutions to broader issues — mass media and communism, black-Jewish relations, the revolutionary use of force — while searching out an authentic black culture based in political self-consciousness and economic independence.

"[T]he most imaginatively documented and politically sophisticated working prospectus on the built-in contradictions and disjunctions of the Negro Revolution."—Albert Murray

"When all the manifestoes and polemics of the Sixties are forgotten, this book will survive as a monument of historical analysis—a notable contribution to the understanding of the American past, but more than that, a vindication of historical analsis as the best way, maybe the only way, of gaining a clear understanding of social issues."—Christopher Lasch, New York Review of Books