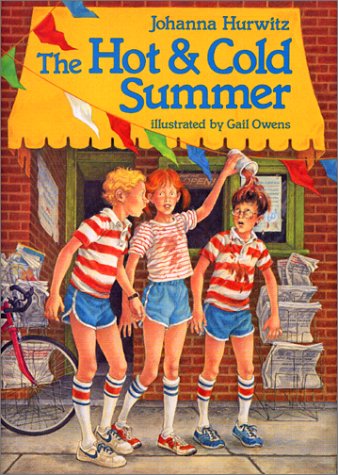 Poor Rory and Derek. just as the boys are looking forward to their best summer ever, they're ordered to play host to a girl, named Bolivia, visiting nearby. "You'll love her," parents and neighbors insist -- but the ten-year-old best friends know better. After all, nobody consulted them about making their twosome a threesome. So the boys unleash Rory's revenge: clever schemes to avoid meeting or speaking with their unwanted guest.
Sometimes, though, how you react to a new situation isn't quite the way you thought you were going to. Rory and Derek discover this -- and learn a few things about their own friendship, too -- during what turns out to be a most unpredictable summer.
With her unerring ability to humorously evoke children's concerns and quandaries, Johanna Hurwitz has created yet another story sure to be popular with young readers.

Johanna Hurwitz is the author of over five dozen books for young readers. She is the recipient of many state awards, including the Texas Bluebonnet Award, the Kentucky Bluegrass Award, and the Garden State Children's Choice Award. She lives in Great Neck, NY.

Johanna Hurwitz always knew she wanted to be a writer. She started by telling stories to her brother, who is six years her junior, and she's been making up stories ever since. Born and raised in New York City, she earned her B.A. degree from Queens College and went on to receive a master's in library science from Columbia University. She embarked on a career as a children's librarian, but she never forgot that one day she wanted to write books, too.

She worked at the New York Public Library and in a variety of other public and school library positions. She also taught graduate courses in children's literature and storytelling at Queens College. When she and her husband, Uri -- a college teacher and writer-and their children, Nomi and Beni, moved to Long Island, she continued her library work.

Although she had told original stories to her children, it was not until they were well along in school that Mrs. Hurwitz actually began to write down her stories. That's why, when children ask her how long it takes to write a book, she replies that her first, Busybody Nora, took her whole life.

But since then she has been writing with regularity, portraying with humor and sympathy the everyday incidents that are so important to children. She is particularly fond of seven- to nine-year-olds, because they are " so very open and get excited about small things," and she enjoys writing realistic fiction for and about them.

That these youngsters are equally fond of Mrs. Hurwitz's books is obvious. She has received many child-chosen state awards, including the Texas Bluebonnet Award, the Wyoming Indian Paintbrush Award, the Kentucky Bluegrass Award, the Garden State Children's Choice Award, the West Virginia Children's Book Award, and others.

In recent years, Johanna Hurwitz has crisscrossed the United States from Juneau, Alaska, to Jackson, Mississippi, and from San Diego, California, to St. Albans, Vermont. She has even spoken abroad, from Morocco to Mozambique and from Portugal to Nicaragua. On these trips she has met and spoken to schoolchildren, teachers, librarians, and parents. She has made many new friends and has often brought home new ideas for her next book.