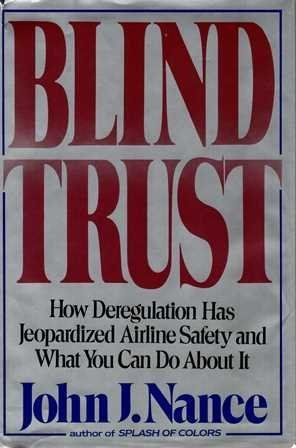 Arguing that deregulation has added nearly irresistible economic pressures to a system already strained, the author, a pilot and lawyer, examines the limitations of the Federal Aviation Administration, explores the role of human performance in safety problems, and presents practical solutions to the problems

In graphic detail, this book demonstrates the havoc that has been wrought in the airline business in this country by the deregulation bill of 1978. Lower fares mean less income, and less income results in cost-cutting. The major carriers have pared expenses by eliminating flights to smaller cities, spurring the growth of many regional and commuter lines. Such lines, often economically marginal, shave their costs by hiring relatively inexperienced pilots, using inadequate or antiquated planes, and skimping on equipment maintenanceall of which sacrifices passenger safety. While Nance, a lawyer and pilot, does not urge a return to the pre-1978 days, he recommends that the Federal Aviation Administration, as the industry watchdog, be given increased powers to control airline safety. Presenting even relatively technical information in terms of the people involved, Nance makes his case convincingly. 35,000 first printing; $30,000 ad/promo; author tour. Foreign rights: Morrow. January 28
Copyright 1985 Reed Business Information, Inc.

The deregulation of the airlines in 1978 has produced a serious erosion of the margin of safety for passengers, argues author Nance, a former pilot for Braniff Airlines and currently a lawyer. He claims that lack of managerial and agency supervision in training and maintenance too often produces tragic accidents. Nance's harrowing and tense re-creations of many of these accidents are quite effective; however, he interweaves a welter of claims, statements, and facts in such disorder and profusion that his very significant indictmentthat after 1978 the airlines "reverted from an industry under partial surveillance to an industry running on the honor systmem," and that honor often was not enoughremains effectively out of reach. There is a remarkable mass of information here, all of worth to aviation interests (even a matter of life and death, one could argue), but general readers and those impatient to get to the point will be frustrated. Mel D. Lane, Sacramento, Cal.
Copyright 1986 Reed Business Information, Inc.

Book Description Condition: New. Arguing that deregulation has added nearly irresistible economic pressures to a system already strained, the author, a pilot and lawyer, examines the limitations of the Federal Aviation Administration, explores the role of human performance in safety prob. Seller Inventory # 9780688053604