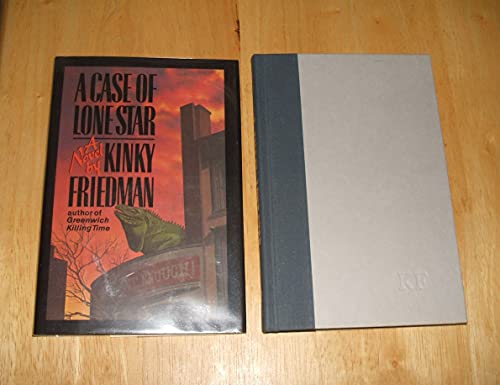 Kinky, the reluctant detective, must solve the murder of Larry Barkin, a top country music star at the legendary Lone Star Cafe in New York City

"A Case of Lone Star, my second novel, was begun in New York and completed in Texas. Its setting is the legendary Lone Star Cafe in Manhattan where I performed for many years sometimes walking on my knuckles or having to be wheeled onstage on a gurney. The book deals with cats, cocaine, cigars, country music, and anything else that begins with a "c". It also deals heavily with the Hillbilly Shakespeare, the Jesus of the Bible Belt, the Anne Frank of the Louisiana Hayride, Hank Williams, who passionately intermingled his life and his work, the latter being beautiful beyond words and music, the former ending officially on January 1, 1953, crucified in a Cadillac on a lost highway at age twenty-nine which was a little younger than Jesus but a little older than John Keats..."

Kinky Friedman - commonly known to his many fans as 'The Kinkster' - first found fame as the lead singer of the country-and-western band 'The Texas Jewboys'. He is also the author of a series of highly acclaimed detective stories, featuring himself as the wise-cracking, cigar-smoking, cat-loving sleuth. He populates his novels with many of his friends and associates, portraying them (to their great delight) as villains, cheats and con-men. In the words of the great Willie Nelson, he is the 'best whodunnit writer to come along since Dashiel Whats-his-name'. Kinky Friedman lives in a trailer in the South Texas Hills with two dogs, two cats and Dilly, his pet armadillo.