Items related to Retreat, Hell!: We're Just Attacking in Another... 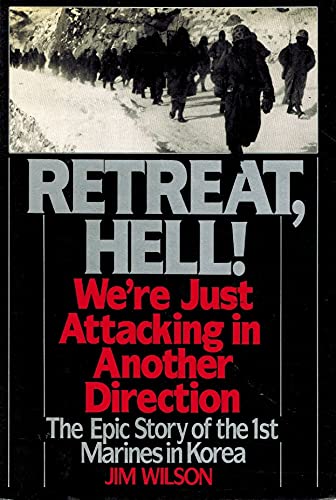 In Nov.-Dec. 1950, the 1st Marine Division and part of the 7th Army Division were surrounded and vastly outnumbered at the Chosin Reservoir in northeast Korea by Chinese Communist forces, but managed to fight their way to Hungnam where an armada of ships took survivors to safety. Wilson offers a simplified, journalistic version of this complex campaign. Drawing on veterans' reminiscences, he stitches together a traditional gung-ho account of Marine operations but has little to say about the Army battalions whose sacrifice, according to some historians, enabled the Marines to escape. The book is marred by the author's descriptive inadequacies ("Boom!" appears six times on one page, for instance) and excessive reliance on stiff-upper-lip dialogue recalled over a span of nearly four decades. Wilson is photo editor for the Los Angeles Times. Photos. Military Book Club dual main selection.
Copyright 1988 Reed Business Information, Inc.

Book Description William Morrow & Co, 1988. Hardcover. Condition: New. BRAND NEW . Excellent Hardcover Book And Dust Jacket. Contents In . MINT . Unread Condition. Book Contains No Publishers Marks. HEROISM, SACRIFICE, VALOR -- This Is The True Story Of Gallant Men And There Time In The Frozen Hell Of Korea And There Retreat From The Chosin Reservoir. Packed With Stories And Details Obtained By Interviewing The Veterans Of The 1st. Marines. In There Own Words, You'll Discover The Never-Before-Told Stories Of Hundreds Of Survivors Of The 1st. Marines Who Were Suddenly Confronted By An Enemy That Was Not Supposed To Be There --- Seven Divisions Of Experienced, Well-Armed CHINESE SOLDIERS! Jacket May Have Slight Edge Wear. Includes Photographs And Maps. 349 Pages. FREE . Postal Tracking And Delivery Confirmation. Complete 100% Customer Satisfaction & Service Guaranteed Since 1970! Please Read Our Positive Feedback And Comments Posted On Amazon By Our Great Customers, Valued Returning Clients And Friends. Seller Inventory # IM-QLR5-G6N2