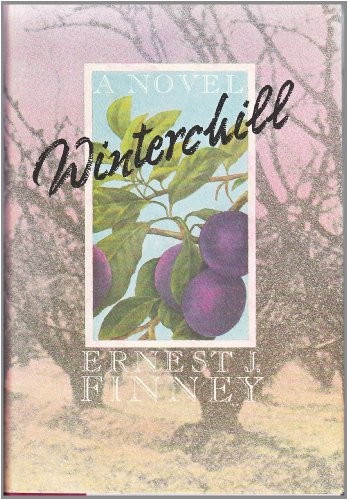 Set in a plum orchard in California, six members of the Clark family narrate this story of a father-son relationship, their connections to the land, and their claims on one another. Winterchill--the long period of cold weather necessary for plum blossoms to break--is the story of how these embattled individuals grow into themselves. With characters as elemental and earthy as the plum trees in this orchard, and in stark, spare prose, Ernest J. Finney has written a deeply felt novel of renewal.


Ernest J. Finney is a treasure.  He can take a well-worn theme, turn it inside out, look at it from several angles, and each time find something exciting. In "Winterchill," his first novel, Finney takes on the family, an almost obligatory subject for the first novelist, and sets it on his ear.  The family is the Clarks, who own a 640-acre plum orchard in California.  The principals are the patriarch, Jim, who pieced together the spread, and his grandsons James, a hulking drunkard, and Elmo, younger and smarter.  On the periphery are three others: Gerald, an abandoned child taken in by the Clarks, and James' and Elmo's wives, Greta and Betty.

The family saga is told in a series of short stories spanning four decades, and each written from a separate point of view.  Artistically, it's a smashing success.  In simple, declarative prose and with masterful storytelling, Finney has created characters we come to care about deeply, despite their failures--or, perhaps more tellingly, because of them.

Finney writes about the salt of the earth in the tradition of Steinbeck. Wife-beating, hard-drinking James Clark and his moody, sensitive younger brother Elmo, pitted in rivalry over the same girl, work a rolling California plum orchard presided over by their crusty grandfather Jim. The land, held for three generations, but now slipping inexorably out of their grasp, is a curse for this luckless family. There are other losses too: the boys' mother walked out on them long ago; Grandpa Jim became estranged from his sister after a silly spat; Elmo will go on to fight in Vietnam to avoid his young bride, then come home shell-shocked, his skull fractured. This homespun, deceptively simple saga emerges like a jigsaw puzzle from the viewpoints of six different characters as it hops around from the 1950s through the '80s. It's a coming-of-age novel that keeps a sense of humor; in one scene Jim tells his girlfriend how beautiful she is, then promptly throws up. Without artifice, Finney ( Bird's Landing ) gives voice to his characters' rage, dreams, grief and love of the land.
Copyright 1988 Reed Business Information, Inc.