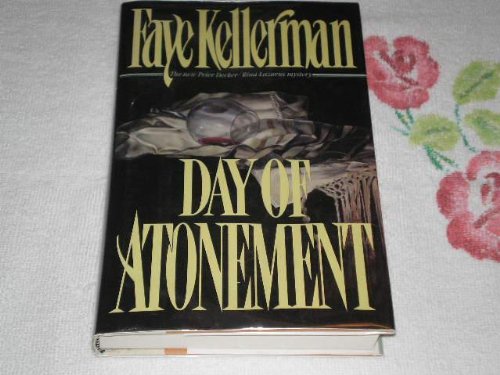 Detective team Peter Decker and Rina Lazarus, in Brooklyn for the Jewish High Holy Days after their marriage, find themselves on the trail of an Orthodox teenaged runaway kidnapped by a psychopath

Part of my responsiblities as mass market managing editor of Ballantine includes handling reprints. In addition to updating front and back matter in order to keep everything up to date, I make sure that any text changes that need to be made are indeed made. This could include anything from factual information that an author wants to change to simple misspellings (although we pride ourselves in having many books with zero typos). Well, recently I received a letter that had originally been sent from a reader to Faye Kellerman, who sent it on to us. The reader wrote about how much she loves Faye's books, and she was shocked to find a few typos in one of the books. I reviewed her list of "errors," and lo and behold, a couple of them absolutely had to be changed. Whenever a reader does something like this, I like to respond with a letter of my own, along with a copy of the book with the corrections made. But in this case there was only a return address; nowhere was there a name. I looked at the address again; it sounded awful familiar. I searched the remnants of my limited brain and suddenly realized that the letter had come from one of my best friends' mothers. And I could see Mrs. R's style all over it. I immediately called my friend and told him about it; we decided to do nothing until the next reprint comes out, with the corrections. Then I'll send a copy of the book, with a note from me, thanking Mrs. R for all her help. I guess the world gets a little smaller every day. . . .

L.A. detective Peter Decker and his Jewish bride, Rina Lazarus, are spending their honeymoon in the unlikely locale of Brooklyn, celebrating the Jewish High Holidays. But the festivities are shattered when Noam, an Orthodox teenager, runs away from his family and his cloistered community.

Finding runaways is Decker's specialty. But it's tough getting anyone to open up about a missing kid nobody likes, especially in a close-knit Orthodox society where Decker is clearly an outsider. Then he discovers a line to the outside world that could be the hook he needs to reel in the kid and his companion--a dangerous psychopath with nothing to lose. . . .