Items related to Let the Drum Speak: A Novel of Ancient America

Let the Drum Speak: A Novel of Ancient America 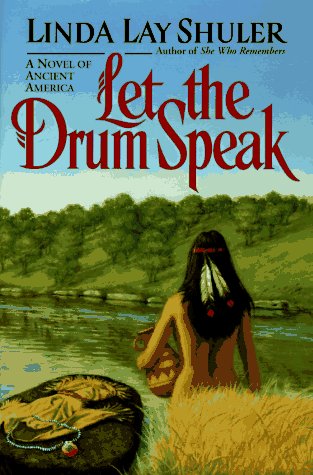 Kwani's beautiful and high-spirited daughter, Antelope, journeys with her Hasinai mate and her daughter to the city of the moundbuilders and into the designs of the Hasinai's Great Sun

Linda Lay Shuler (1910–2011) was a brilliant, creative, ambitious woman born before her time. She wrote and produced for radio in the days women were expected to stay at home, receiving awards against conglomerate giants. Television was a new medium at the time, and she jumped right into it, writing, producing, and directing travel documentaries for the Texas Highway Department, writing and producing a traffic courtroom series, and establishing radio/TV workshops. The biggest accomplishment in her film life was when she wrote, directed, and produced a fivescreen film, the first of its type. Sponsored by Humble Oil (Exxon), it was presented at the 1968 Hemisfair in San Antonio, in a circular building created especially for it. But perhaps her most lasting professional accomplishments were her three novels.

The elementary but agile further adventures of Shuler's 13th- century Native Americans in territory encompassing sections of what will be New Mexico, Oklahoma and Missouri. Here, Antelope, a Pueblo Indian who, like her mother Kwani (Voice of the Eagle, 1992; She Who Remembers, 1988), becomes the guardian and teacher of the ancient secrets of women, journeys from her home to meet both love and peril. With her mate Chomac, son of the fabled, wily trader Kokopelli, Antelope and her baby daughter Skyfeather take the long trek to the City of the Great Sun. The ruler of that city (who goes by the moniker ``Great Sun'') is hiding a scandalous secret. Fearing the arrival of the son of Kokopelli and the daughter of Kwani (their coming having been foretold), he plots their elimination. Before long, Antelope must also contend with: a jealous shaman who threatens Skyfeather, the Great Sun's glowering sister, and the Great Sun himself, who lusts for Antelope and plans to have Skyfeather, the perfect baby, sacrificed. Meanwhile, Chomac, flighty like his wandering sire, is lured away by Tima-eha, the lusty queen of the City of the North. Before the Great Sun can carry out his schemes, he is deposed. Antelope's new best friend, the healer Far Walker, is chosen to be the next Great Sun. Despairing of the absent, faithless Chomac, Antelope becomes Far Walker's mate, and when he travels on a state journey to Tima-eha, she reigns in his place. Far Walker's return from that dangerous queen is fraught (hardship, a killer earthquake), but thanks to Chomac (in a redeeming act), he survives. Then Antelope must deal with a painful question: Should she return to her old home and follow the ancestors' command to warn her people about the doom to come (the arrival of the Spaniards)? Some hard information here based on major archeological digs, but, overall, cartoon-soft, even if modestly diverting. -- Copyright ©1996, Kirkus Associates, LP. All rights reserved.

1. Let the Drum Speak: A Novel of Ancient America

2. Let the Drum Speak: A Novel of Ancient America

3. Let the Drum Speak: A Novel of Ancient America

4. Let the Drum Speak: A Novel of Ancient America

5. Let the Drum Speak: A Novel of Ancient America