Items related to The Nazi Officer's Wife: How One Jewish Woman Survived... 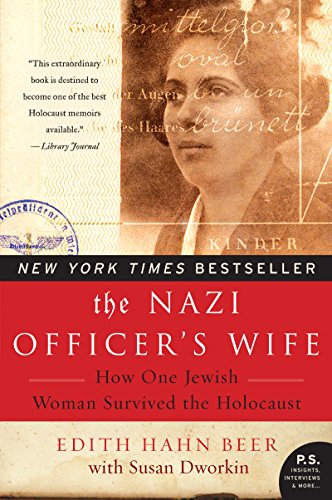 Edith Hahn was an outspoken young woman in Vienna when the Gestapo forced her into a ghetto and then into a slave labor camp. When she returned home months later, she knew she would become a hunted woman and went underground. With the help of a Christian friend, she emerged in Munich as Grete Denner. There she met Werner Vetter, a Nazi Party member who fell in love with her. Despite Edith's protests and even her eventual confession that she was Jewish, he married her and kept her identity a secret.

In wrenching detail, Edith recalls a life of constant, almost paralyzing fear. She tells how German officials casually questioned the lineage of her parents; how during childbirth she refused all painkillers, afraid that in an altered state of mind she might reveal something of her past; and how, after her husband was captured by the Soviets, she was bombed out of her house and had to hide while drunken Russian soldiers raped women on the street.

Despite the risk it posed to her life, Edith created a remarkable record of survival. She saved every document, as well as photographs she took inside labor camps. Now part of the permanent collection at the Holocaust Memorial Museum in Washington, D.C., these hundreds of documents, several of which are included in this volume, form the fabric of a gripping new chapter in the history of the Holocaust—complex, troubling, and ultimately triumphant.

Born in Vienna in 1914, Edith Hahn Beep, currently resides in Netanya, Israel. She and Werner Vetter divorced in 1947. Her daughter, Angela, lives in London and is believed to be the only Jew born in a Reich hospital in 1944.

A well-written, tense, and intimate Holocaust memoir by an author with a remarkable war experience. Young Beer (ne Hahn) was a promising Viennese Jewish law student until the German Anschluss annexing Austria made her circle stop its laughing (``Hitler is a joke. He will soon disappear''). She was a Christmas-tree Jew with a Gentile boyfriend (dreaming of a socialist paradise), but Zionist siblings (who escape to Palestine), and the deadly follow-ups to the Nuremberg Laws send Beer into an underground existence as a ``U-boat'' in Aryan Germany. Beer took on an Austrian friend's documents and identity, got employed with the Munich Red Cross, and dated soldiers for the meals and covermarrying one Nazi, Werner Vetter, with a good job and expertise in art. She admitted her Jewishness to him but lived outwardly as a normal Hausfrau. Beer talked her husband into pregnancy, even though under Nazi rule their baby would be considered Jewish. The baby was a girl, making Werner furious``a Nazi who made a religion of twisted, primitive virility,'' Hahn comments. The losing Reich drafted the one-eyed Werner, made him an officer, and shipped him to Russia. The Nazi officer's wife discovered the Holocaust from forbidden BBC broadcasts and so learned the fate of family and friends. After the Russians conquered and burned her neighborhood, Beer retrieved her old identity papers and diploma, and this illegal fugitive was eventually transformed into a feared judge. Some embittered Jewish survivors cursed her for the way she survived the war, but Beer was still fearful enough to baptize her daughter. A returned Werner rejected the independent Edith who had replaced his servile Grete, so Beer divorced him in 1947, left the oppressive Russians, and emigrated to England, then, in 1987, to Israel. This engaging book goes deeper than psychologizing on the (Patty) Hearst Syndrome in explaining how the survival instinct allows one to sleep with the enemy. (Author tour) -- Copyright ©1999, Kirkus Associates, LP. All rights reserved.

THE NAZI OFFICER'S WIFE: HOW ONE