Items related to The Whistle Blower 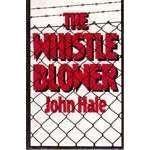 Frank Jones is determined to find out the truth about the death of his son, a Russian linguist working for British intelligence

Bob Jones, a linguist working for British intelligence, is killed in a fall from the roof of his Cheltenham apartment. His death is ruled accidental, but his father, Frank, suspects murder and sets out to prove it. The rest of book is devoted to Frank's struggle against corrupt and powerful government agencies as he attempts to uncover the truth. Although this is billed as a spy thriller, the traditional spy thriller fan looking for the excitement of a Forsyth, Ludlum, or Higgins will be disappointed. The book is more of a sad commentary on corruption in intelligence circles. Hale's writing is sensitive and thought-provoking and his characters are realistically portrayed. Recommended for larger fiction collections. Brian Alley, Sangamon State Univ. Lib., Springfield, Ill.
Copyright 1985 Reed Business Information, Inc.