Items related to New York, New York: A History of the World's Most...

New York, New York: A History of the World's Most Exhilarating and Challenging City 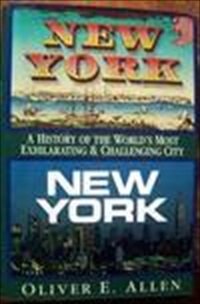 Allen, a former editor and writer for Time Life Books, offers a narrative history of the city from its establishment in 1624 to the 1990 mayoral election. He attributes the prominence of present-day New York to its financial power, symbolized by Wall Street, and to its harbor, which contributed to its economic clout and served as the destination for a diverse immigrant population. Though promising a description of the 375-year history of New York, Allen concentrates mainly on the Colonial/Revolutionary era and the Gilded Age, and summarizes the findings of books published during the last half century. Writing in an offhand, journalistic style, he focuses on the more visible, popular elements of New York and seldom explains the dynamics of the city or the people who have lived in it. Useful only as a basic introduction to the complex history of a paradoxical city.
-David Szatmary, Univ. of Washington, Seattle
Copyright 1990 Reed Business Information, Inc.

Allen, a former editor and writer for Time-Life Books, spans in one entertaining volume New York City's history, from its earliest days as a bustling port to its recognition as financial capital of the world. Using as his leitmotif the great harbor, which has shaped New York from the start as a port of entry for people, money and power, he covers noteworthy aspects of the city from the 1700s to the present--prominent citizens, political figures, scandals and crises, financial organizations, immigrant groups, cultural institutions and majestic buildings. Telescoping so much history into fewer than 500 pages, the narrative is as fast-paced as New York City itself, as Allen conveys the energy and excitement that have enabled the city to thrive and prosper. Photos not seen by PW.
Copyright 1990 Reed Business Information, Inc.

1. New York, New York: A History of the World's Most Exhilarating and Challenging City