Items related to The Sun Maiden 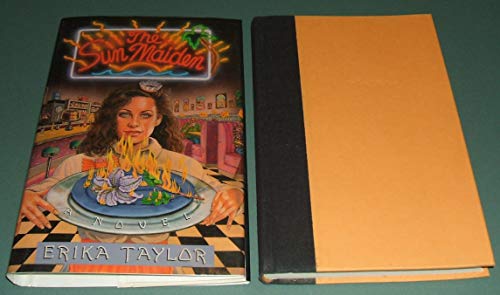 In Los Angeles to locate her father--who disappeared when she was a baby--J.O., a waitress at the Sun Maiden coffee shop, meets up with an eccentric cast of characters--including her gun-loving boss and a blond television starlet

Taylor's bizarrely entertaining debut features a young down- and-out waitress whose involvement with an Israeli fugitive, a .357 Magnum, a ditsy busboy, his schizophrenic brother, and a pet rat named Fear can lead only to trouble--an original, witty, giggle- provoking L.A. story. Twenty-year-old J.O. is having trouble keeping her waitress job at the Sun Maiden diner three miles outside of Hollywood. Not only is she always late, but packets of Sweet'N Low keep falling out of their pocket in her shoulder bow, her cap is invariably wrinkled, and she rarely makes it through a shift without mixing up the customers' orders or spilling coffee on someone's dress. Rafi, the Israeli night-manager, suggests she try shooting his .357 Magnum to counterbalance her sense of inadequacy. J.O finds she likes guns, and begins accompanying her boss to the shooting range while the two engage in an increasingly serious affair. Though J.O. suspects that Rafi, with his gun collection and clandestine meetings with eccentric strangers, is probably up to something illegal, she's too distracted by her crazed roommate, a self- dramatizing actress; their landlord, an old man obsessed with creating the Car of the Future; and the search for her long-absent father, which brought J.O. from Manhattan to L.A. in the first place, to pay much attention. In the end, Rafi flees to Israel to avoid the feds, leaving J.O. to struggle alone (and, as it turns out, more or less triumphantly) with her roommate's romantic troubles, her landlord's involvement with loan sharks, a busboy's desire to save his insane brother's life, and the fact that her father, the man responsible for naming her ``Jambalaya Orleans'' back in the early 70's, seems to have forgotten that she exists. Sharp-witted black comedy by a promising 26-year-old novelist. -- Copyright ©1991, Kirkus Associates, LP. All rights reserved.

Novels about the South used to have a monopoly on squirrely characters with quirky names playing out oddball slices of life (e.g., Sarah Gilbert, Sarah Bird, early Rita Mae Brown), but this first novel takes place in Los Angeles and still has a character named Jambalaya Orleans (J.O. for short, and she's not even Southern, just conceived there!) hanging around with weird characters like Mr. Saul, who's building the Car of the Future with Mafia money he can't repay; busboy Andy and his ubiquitous pet rat Fear; and an Israeli obsessed with guns. The Israeli owns the Sun Maiden Cafe, where J.O. works as a novice waitress (picture the old Alice TV show, except in L.A.), and he also runs a marriage-for-green-card service. It's all held loosely together by J.O.'s search for her long-lost father, but nothing much happens, and what does is predictable and derivative. Aren't there enough novels out there like this, peopled with slice-of-lifers with strange names talking cute? Skip it.
- Rosellen Brewer, Monterey Cty. Free Libs., Seaside, Cal.
Copyright 1991 Reed Business Information, Inc.