Items related to Let My People Go : Bible Stories Told by a Freeman...

Let My People Go : Bible Stories Told by a Freeman of Color 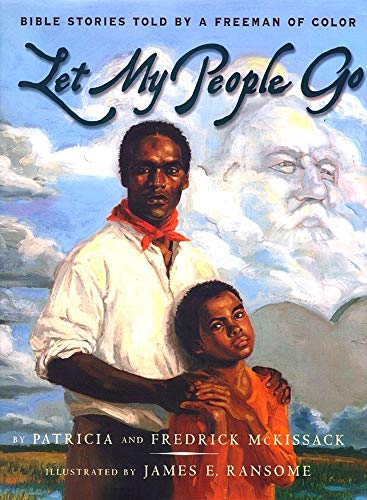 "Come join me as I take you back to Charleston, South Carolina, to my father's forge in the early 1800's. Sit with me on the woodpile as he tells a tale of faith, hope, or love."
In this extraordinary collection, Charlotte Jefferies and her father Price, a former slave, introduce us to twelve best loved Bible tales, from Genesis to Daniel, and reveal their significance in the lives of African Americans--and indeed of all oppressed peoples.
When Charlotte wants to understand the cruel injustices of her time, she turns to her father. Does the powerful slaveholder, Mr. Sam Riley, who seems to own all that surrounds them, also own the sun and moon? she wonders. Price's answer is to tell the story of Creation. How can God allow an evil like slavery to exist? she asks. Price responds by telling the story of the Hebrews' Exodus -- and shows Charlotte that someday their people, too, will be free.
With exquisite clarity, Patricia and Fredrick McKissack and James Ransome -- a Newbery Honor winner and all Coretta Scott King Award winners -- brilliantly illuminate the parallels between the stories of the Jews and African-American history. Let My People Go is a triumphant celebration of both the human spirit and the enduring power of story as a source of strength.
Our hope is that this book will be like a lighthouse that can guide young readers through good times and bad....The ideas that these ancient stories hold are not for one people, at one time, in one place. They are for all of us, for all times, everywhere.
--from the Authors' Note to Let My People Go

Fredrick McKissack has nearly 20 years experience as a writer and an editor. His articles, op-eds, and reviews have been published in The Washington Post, Vibe Magazine, and others. He lives in Ft. Wayne, Ind. with his wife, Lisa and their son, Mark.

James E. Ransome’s highly acclaimed illustrations for Before She Was Harriett received the 2018 Coretta Scott King Illustrator Honor. His other award-winning titles include the Coretta Scott King winner The Creation; Coretta Scott King Honor Book Uncle Jed’s Barbershop; Sweet Clara and the Freedom Quilt; and Let My People Go, winner of the NAACP Image Award. He frequently collaborates with his wife, author Lesa Cline-Ransome. Some of their titles include Game Changers: The Story of Venus and Serena Williams, which received four starred review and was an ALA Notable book; My Story, My Dance: Robert Battle’s Journey to Alvin Ailey; and Words Set Me Free: The Story of Young Frederick Douglass. Mr. Ransome teaches illustration at Pratt Institute and lives in upstate New York with his family. Visit James at JamesRansome.com

In this stunning achievement, the renowned husband-and-wife team sets 12 Old Testament stories in the context of early 19th-century South Carolina, illustrated with Ransome's glorious paintings. As the McKissacks state in their introduction, "The stories are timeless treasures, universally read and honored, but no group embraced the Hebrew heroes of old more than African Americans during slavery times." The dozen tales unfold as Price Jeffries, who won his freedom in a seaman's lottery, tells them to his daughter in answer to her questions about what she sees happening in the world around her. The collection opens as father and daughter encounter a constable for wealthy slaveholder Mr. Riley and Charlotte asks her father, "Do Mr. Sam Riley own the moon?" He responds with the story of creation and tells her, "Nobody can make a slave of the moon, the sun, the stars, or any part of what God created, no matter how rich they may be. God made something wonderful out of nothing. What human being can do that?" Through the characters of Charlotte and Price Jeffries, based on historical abolitionists, the McKissacks answer the toughest questions of this troubling period of American history with stories of faith. When Charlotte witnesses an African child's death on the auction block, she asks her father, "Why is it God lets one person buy and own another person?" He answers with the story of Eden and "how God let the first people make their own choices." The story of the courtship of Charlotte's parents ("a love worth waiting for") leads the way to that of Jacob and Rachel. Each Old Testament story builds upon the one before it, weaving the development of Charlotte's personal history and the Biblical stories into a seamless whole. The volume's design further integrates the interlacing elements: Charlotte's story is set in warm bluish type, the Biblical retellings in classic black. Ransome's remarkable portraits capture the full range of Charlotte's and Price's emotions, as well as the serene dignity of leaders such as Solomon and Moses and of Daniel in the lion's den. His version of dramatic Old Testament events, particularly his vision of the creation, are captivating. Readers will likely return to this extraordinary volume again and again, knowing that the answers to life's painful questions reside in the stories of faith that have comforted others for thousands of years. All ages.
Copyright 1998 Reed Business Information, Inc.

2. Let My People Go : Bible Stories Told by a Freeman of Color

3. Let My People Go : Bible Stories Told by a Freeman of Color

4. Let My People Go : Bible Stories Told by a Freeman of Color

5. Let My People Go : Bible Stories Told by a Freeman of Color