Items related to Mrs. Brown on Exhibit: And Other Museum Poems

Katz, Susan Mrs. Brown on Exhibit: And Other Museum Poems

Mrs. Brown on Exhibit: And Other Museum Poems 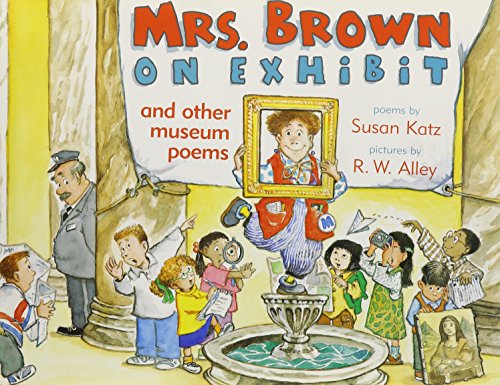 Mrs. Brown loves museums -- and so does her class! In fact, these cultural connoisseurs are just wild about field trips. Whether it's sneaking up on an ancient Egyptian mummy, walking into a room of fluttering butterflies, or stomping through a giant heart, this class surely makes the grade when it comes to fun. They even take a tour of a skull exhibit and visit a lady who turned to soap! But the excitement doesn't stop there -- author Susan Katz uses a wide variety of poetic forms and unusual exhibits to show just how fascinating museums can be. Her text paired with the hilarious illustrations of acclaimed artist R. W. Alley will have readers grabbing their permission slips and readying themselves for a day of museum madness.

Susan Katz is the author of Mrs. Brown on Exhibit as well as Snowdrops for Cousin Ruth, which was featured in Publishers Weekly's "Flying Starts." She has taught at Community College of Philadelphia and runs poetry workshops for children, in schools and elsewhere. She lives with her husband and son in Phoenixville, Pennsylvania.

R. W. Alley has illustrated more than fifty children's books that include Thanksgiving Day at Our House by Nancy White Carlstrom and Mrs. Brown on Exhibit by Susan Katz. He is currently working on several series, including Paddington Bear by Michael Bond, Detective Dinosaur by James Skofield, and the Know-Nothings by Michele Sobel Spirn. He resides in Barrington, Rhode Island.

Mrs. Brown is "the field trip queen," and that means her lucky students get to visit museums galore, exploring collections ranging from the tried-and-true (dinosaurs, mummies, statues) to the extremes of eccentricity (things that people have swallowed). Katz (Snowdrops for Cousin Ruth) adopts the voices of the schoolchildren themselves to celebrate the outings in 20 poems. The speakers expound in both blank and rhyming forms, in alternately playful and contemplative moods. A statue garden inspires one student to muse, "I think myself forever still. Like this rearing horse, whose hooves will never return to earth." The Insectarium brings out a more jovial perspective: "Toe-biter, earwig, and katydid Sheldon's fingers drift toward a lid. Mrs. Brown has to give him two tugs. So he won't reach inside and bug the bugs." Whether lyrically crystallizing an observation or reporting on the antics of the class cut-ups, the poems convey the excitement of kids on an adventure. Alley's (the Paddington Bear books) sprightly, realistic watercolors show the children engaged on a wonderful variety of levels they're mesmerized by alighting butterflies and grossed out by human skulls. As for Mrs. Brown herself, she's a dandy docent, donning a surgeon's scrubs in the medical museum and savoring a lollipop in the free sample room of the candy museum. An endnote lists offbeat museums in every state. Ages 6-10.
Copyright 2002 Cahners Business Information, Inc.

1. Mrs. Brown on Exhibit: And Other Museum Poems

2. Mrs. Brown on Exhibit: And Other Museum Poems Katz, Susan and Alley, R.W.

3. Mrs. Brown on Exhibit: And Other Museum Poems Katz, Susan and Alley, R.W.