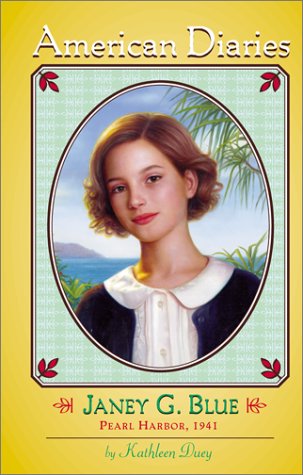 Janey's peaceful homelife in Hawaii is suddenly and forever changed as the bombs begin to drop from the sky on Pearl Harbor on December 7, 1941. Original.

From School Library Journal:
Gr 4-8-Sunday morning, December 7, 1941, begins rather normally for Janey and her mother and little brother, except that her father has been called to Hickam Airfield to fix a welding problem. Janey and her family have recently moved from Kansas to Oahu. Everything here is different, but the sixth grader likes her new school. She would also like to be friends with Akiko Fujiwara, who lives across the street, but the family keeps its distance. Then, with the air attack on Pearl Harbor, everything changes. Through Janey, readers experience the terror of the dropping bombs and strafing, and concern over Mr. Blue's whereabouts. Separated from her parents, Akiko goes with the Blues as they search for a place of safety and a way to reunite with Janey's father. The mood of fear and uncertainty is well maintained, and information about the attack is neatly interwoven with the story. Readers also see, though they do not fully understand, how quickly tolerance and acceptance of Japanese-Americans could turn to irrational fear and hatred in the aftermath of the attack. A good historical novel that doesn't seem like a history lesson.