Items related to Retreat into the Mind (Princeton Legacy Library) 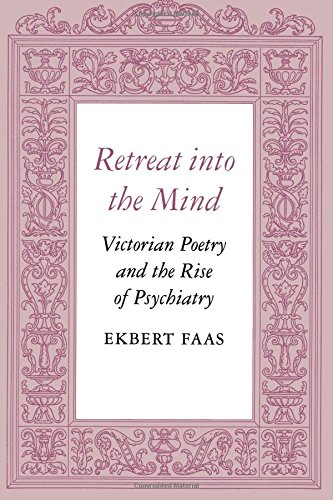 ere Ekbert Faas examines the complex interrelationships among the fields of early psychiatry, poetry, and aesthetics through an in-depth study of the Victorian dramatic monologue and its Romantic antecedents. Discussing the work of over thirty major and minor poets, he focuses on what Victorian critics viewed as an unprecedented psychological school of poetry related to early psychiatry and rooted in the poetic "science of feelings" (Wordsworth). This broad historical perspective enables Faas to redefine our current terminology regarding the dramatic monologue and to document the extent to which early psychiatry shaped the poetry, poetics, and general frame of mind of the Victorians. "In the nineteenth century, English poetry began to explore the psyche in ways contemporaries recognized as new. Wordsworth and Coleridge pioneered what Arnold, Tennyson, and Browning continued. Professor Faas painstakingly documents this, and reactions to it, with reference to simultaneous psychiatric work. Fascinating."--Encounter

1. Retreat into the Mind

2. Retreat into the Mind: Victorian Poetry and the Rise of Psychiatry