Items related to The Politics of Backwardness in Hungary, 1825-1945 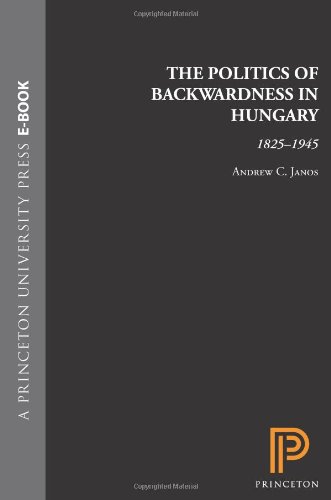 Why did Hungary, a country that shared much of the religious and institutional heritage of western Europe, fail to replicate the social and political experiences of the latter in the nineteenth and early twenties centuries? The answer, the author argues, lies not with cultural idiosyncracies or historical accident, but with the internal dynamics of the modern world system that stimulated aspirations not easily realizable within the confines of backward economics in peripheral national states.

The author develops his theme by examining a century of Hungarian economic, social, and political history. During the period under consideration, the country witnessed attempts to transplant liberal institutions from the West, the corruption of these institutions into a "neo-corporatist" bureaucratic state, and finally, the rise of diverse Left and Right radical movements as much in protest against this institutional corruption as against the prevailing global division of labor and economic inequality.

Pointing to significant analogies between the Hungarian past and the plight of the countries of the Third World today, this work should be of interest not only to the specialist on East European politics, but also to students of development, dependency, and center-periphery relations in the contemporary world.