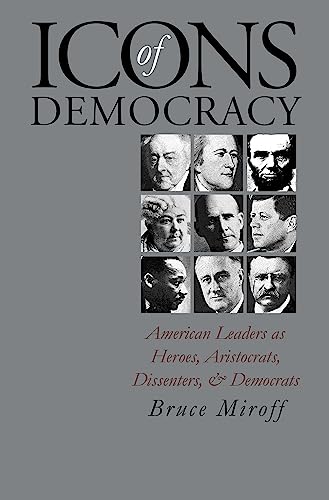 "In an era when American leadership seems sunk in petty power struggles and shallow media spectacles, some of our icons have much to teach us about the forms of leadership that can still speak to the democratic possibilities of the American people," writes Bruce Miroff. In Icons of Democracy, Miroff looks at how nine American leaders have either successfully encouraged or undermined citizens' participatory role in their democracy and helps us rediscover what leadership has meant in the past and how it can reinvigorate public life today.

In a blend of history, biography, political science, and political theory, Miroff offers examples of the finest democratic leadership as well as cautionary tales of prominent leaders whose styles were essentially aristocratic. His study examines John Adams, Abraham Lincoln, Elizabeth Cady Stanton, Eugene V. Debs, Franklin D. Roosevelt, and Martin Luther King, Jr., as leaders who embodied or advanced democratic ideals. He also presents iconoclastic analyses of Alexander Hamilton, Theodore Roosevelt, and John F. Kennedy, in which he concludes that these leaders actually discouraged a truly participatory democracy. In addition, in a new preface to this edition he criticizes Bill Clinton as a postmodern leader more concerned with political fashion than democratic vision.

"This would make an excellent textbook for a college-level class on leadership in American politics." (ALA Booklist)

"Through a vivid and telling chronicle of nine emblematic public figures, Bruce Miroff has produced a challenging new picture of the American political tradition, warning us against our wish for heroes and showing us how our finest statesmen have helped to expand our democratic vistas. Every serious student of American politics will want to read this book."--James Miller, New School for Social Research and author of Democracy Is in the Streets

Bruce Miroff is chair of the political science department at the State University of New York at Albany. He is the author of Pragmatic Illusions: The Presidential Politics of JFK and coauthor of The Democratic Debate: An Introduction to American Politics.