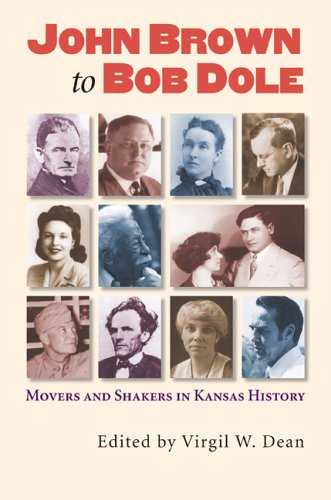 From radical abolitionist John Brown to presidential candidate Bob Dole to visionary environmentalist Wes Jackson, Kansas history is bursting with fascinating stories of individuals who made a difference to the nation and whose lives reveal much about our collective past.

Prominent Kansas historian Virgil Dean has gathered a distinguished team of writers-Thomas Isern, Craig Miner, and others-who have crafted incisive portraits of 27 notable men and women, covering 150 years of Kansas and American history. Here are agitators who moved their fellow citizens to action over political, social, and economic problems: not only John Brown, but also proslavery agitator William H. Russell; Mary Elizabeth Lease, lecturer for the Farmers' Alliance and Populist Party; Gerald B. Winrod, a.k.a. the "Jayhawk Hitler"; and Esther Brown, who challenged segregation in public schools.

Here, too, are motivators, like women's rights activist Clarina I. H. Nichols; William Allen White, the "Sage of Emporia"; and favorite sons Dwight D. Eisenhower and Bob Dole. Then there are the innovators, from trailblazers like Joseph G. McCoy, who changed the face of the cattle industry, and wheat king Theodore C. Henry to Wes Jackson, a pioneer in the sustainable agriculture movement, and the multitalented Gordon Parks, photographer, filmmaker, and author of The Learning Tree.

Reformers and preachers, publishers and artists, these fascinating personalities are brought vividly back to life by Dean and his fellow authors. They offer a fresh and engaging look at many of the important themes of Kansas history-especially the state's identification with some of the great radical movements, including abolitionism, populism, and civil rights-and ultimately recapture the true spirit of Kansas and its meaning for the rest of the nation.

"Highly readable, powerful biographical essays on some of the most important characters in Kansas history by some of the finest historians writing about the state today."--Paul K. Stuewe, editor of Kansas Revisted: Historical Images and Perspectives

Virgil W. Dean is director for publications at the Kansas State Historical Society and editor of the journal Kansas History. He also edited the volume Territorial Kansas Reader and is coauthor of Kansas History: An Annotated Bibliography.