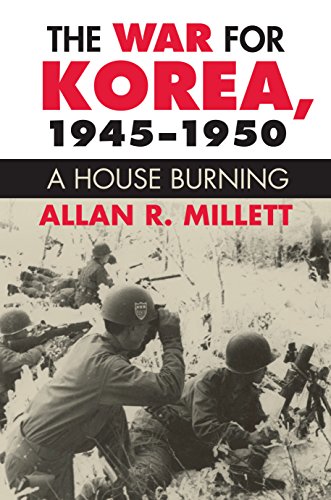 When the major powers sent troops to the Korean peninsula in June of 1950, it supposedly marked the start of one of the last centurys bloodiest conflicts. Allan Millett, however, reveals that the Korean War actually began with partisan clashes two years earlier and had roots in the political history of Korea under Japanese rule, 19101945.

The first in a new two-volume history of the Korean War, Milletts study offers the most comprehensive account of its causes and early military operations. Millett traces the wars origins to the post-liberation conflict between two revolutionary movements, the Marxist-Leninists and the Nationalist-capitalists. With the U.S.-Soviet partition of Korea following World War II, each movement, now with foreign patrons, asserted its right to govern the peninsula, leading directly to the guerrilla warfare and terrorism in which more than 30,000 Koreans died. Millett argues that this civil strife, fought mostly in the South, was not so much the cause of the Korean War as its actual beginning.

Millett describes two revolutions locked in irreconcilable conflict, offering an even-handed treatment of both Communists and capitalists-nationalists. Neither movement was a model of democracy. He includes Korean, Chinese, and Russian perspectives on this era, provides the most complete account of the formation of the South Korean army, and offers new interpretations of the U.S. occupation of Korea, 19451948.

Milletts history redefines the initial phase of the war in Asian terms. His book shows how both internal forces and international pressures converged to create the Korean War, a conflict that still shapes the politics of Asia.

"Millett is one of the very best military historians writing today and his book far surpasses any other in describing and analyzing the military dimensions of events leading up to North Korea's attack on South Korea in June 1950."--William Stueck, author of The Korean War in World Histor

"Authoritative and compelling. . . . A must read for policy makers and all informed citizens interested in the fate of the Korean peninsula."--James T. Laney, former U.S. ambassador to the Republic of Korea and coauthor of U.S. Foreign Policy toward North Korea: Next Steps

Allan R. Millett is Ambrose Professor of History and Director of the Eisenhower Center for American Studies at the University of New Orleans and is the recipient of the Pritzker Military Library Literature Award for Lifetime Achievement in Military Writing. His previous books include Semper Fidelis: The History of the United States Marine Corps, A War To Be Won: Fighting the Second World War, For the Common Defense: The Military History of the United States of America, Their War for Korea, and The War for Korea, 1945-1950: A House Burning.

Shipping: US$ 45.68
From United Kingdom to U.S.A.
Destination, rates & speeds