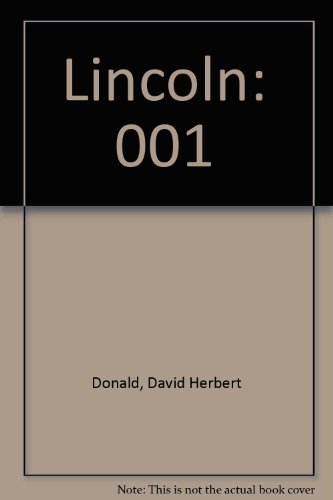 The year's most important biography -- of a leader who still speaks to our times In the bestselling tradition of Truman, two-time Pulitzer Prize-winning biographer David Herbert Donald offers a new classic in American history and biography -- a masterly account of how one man's extraordinary political acumen steered the Union to victory in the Civil War, and of how his soaring rhetoric gave meaning to that agonizing struggle for nationhood and equality. Culminating his half-century of study of Lincoln and his times, Donald brilliantly traces Lincoln's rise from humble origins to the pinnacle of the presidency. He reveals the development of the future President's character and shows how Lincoln's enormous capacity for growth enabled one of the least experienced men ever elected to high office to become a giant in the annals of American politics. And he depicts a man who was basically passive by nature, yet ambitious enough to take enormous risks and overcome repeated defe

From the Publisher:
David Herbert Donald's Lincoln is a stunningly original portrait of Lincoln's life and presidency. Donald brilliantly depicts Lincoln's gradual ascent from humble beginnings in rural Kentucky to the ever- expanding political circles in Illinois, and finally to the presidency of a country divided by civil war. Donald goes beyond biography, illuminating the gradual development of Lincoln's character, chronicling his tremendous capacity for evolution and growth, thus illustrating what made it possible for a man so inexperienced and so unprepared for the presidency to become a great moral leader. In the most troubled of times, here was a man who led the country out of slavery and preserved a shattered Union -- in short, one of the greatest presidents this country has ever seen.
About the Author:
David Herbert Donald is the author of We Are Lincoln Men, Lincoln, which won the prestigious Lincoln Prize and was on the New York Times bestseller list for fourteen weeks, and Lincoln at Home. He has twice won the Pulitzer Prize, for Charles Sumner and the Coming of the Civil War, and for Look Homeward: A Life of Thomas Wolfe. He is the Charles Warren Professor of American History and of American Civilization Emeritus at Harvard University and resides in Lincoln, Massachusetts.

Book Description Hardcover. Condition: Good. No Jacket. Item is in good condition. Some moderate creases and wear. This item may not come with CDs or additional parts including access codes for textbooks. This may not have a dust jacket. Might be an ex-library copy and contain writing/highlighting. Photos are stock pictures and not of the actual item. Seller Inventory # DS-0708958419-3