Items related to The Gentleman's Country House and Its Plan, 1835-1914 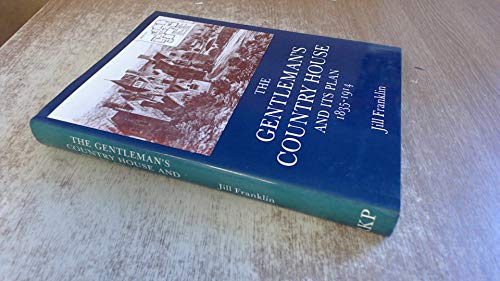 The country houses built between 1835 and 1914 range from architectural masterpieces to the monstrously ugly. Their wealthy patrons, who were as likely to be self-made manufacturers as landed gentry, used their money to build for themselves a perfect setting for a now extinct way of life, based on an army of domestic servants. The Gentleman's Country House and its Plan describes how Victorian and Edwardian country houses were planned and lived in, using a fascinating range of both architectural and literary sources. It makes clear how each house was design to accommodate the various hierarchies within the household, and the rigid social conventions of the time. Though family and guests were helplessly dependent on the servants, they insisted that the servants should live entirely segregated and virtually invisible lives. Children were relegated to the nurseries, smokers to the smoking room, bachelors to the bachelor wing. Architects also had to provide for modern comfort, which included not only plentiful WCs but also central heating and unsmoky chimneys. So plans had to be drawn up with great skill to ensure that everything happened in the right place at the right time. As this book shows, a study of the plans can bring to life a lost social world. Illustrated throughout with drawings and photographs, most of them contemporary, the book includes a collection of plans of seventy houses representing the work of a large number of architects, together with a description of the various types of plan - classical, mediaeval, freely planned and so on - and a critical assessment of how well the individual houses worked.

Book Description Routledge Kegan & Paul, 1981. Hardcover. Condition: Good. Item may show signs of shelf wear. Pages may include limited notes and highlighting. May include supplemental or companion materials if applicable. Access codes may or may not work. Connecting readers since 1972. Customer service is our top priority. Seller Inventory # mon0002293117

2. The Gentleman's Country House and Its Plan

Book Description Routledge. Hardcover. Condition: Good. A copy that has been read, but remains in clean condition. All pages are intact, and the cover is intact. The spine may show signs of wear. Pages can include limited notes and highlighting, and the copy can include previous owner inscriptions. At ThriftBooks, our motto is: Read More, Spend Less. Seller Inventory # G0710006225I3N00

Book Description Routledge Kegan & Paul, 1981. Condition: Good. A+ Customer service! Satisfaction Guaranteed! Book is in Used-Good condition. Pages and cover are clean and intact. Used items may not include supplementary materials such as CDs or access codes. May show signs of minor shelf wear and contain limited notes and highlighting. Seller Inventory # 0710006225-2-4

Book Description Routledge & Kegan Paul, London, 1981. Hardcover. Condition: Very Good. Dust Jacket Condition: Very Good. First Edition. Light rubbing and bumping to board edges; slight soiling to page edges. JACKET: Light scrattling, soiling and edgewear. Size: Large 8vo ( 9 to 11 inches). ISBN: 0710006225. ISBN/EAN: 9780710006226. ## For Tracked shipping on orders to ALL countries (except Australia), select PRIORITY option at checkout ** Weight exceeds 1 kg. Certain destinations may attract a postage surcharge request. Contact us first for a quote via Contact this seller link ** **VIRUS UPDATE - WE ARE ONLY SHIPPING TO AUSTRALIA - NZ - SINGAPORE - JAPAN - CANADA - UK - USA - Delays of up to 2 weeks should be expected due to postal difficulties - All other orders will be cancelled until this is over. Keep Well, Good luck and see you on the other side **. Seller Inventory # 13157

Shipping: US$ 8.16
From United Kingdom to U.S.A.
Destination, rates & speeds