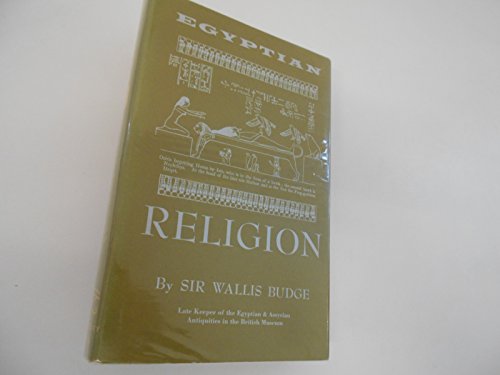 Sir E.A. WALLIS BUDGE (1857-1934) was curator of Egyptian and Assyrian antiquities at the British Museum form 1894 to 1924. Among his many works of translation and studies of ancient Egyptian religion and ritual is his best-known project, The Egyptian Book of the Dead.

A prolific Victorian Egyptologist explores, in this class book first published in 1899, the position of Ra, Osiris, Set, and Isis among the diverse pantheon of numerous deities of ancient Egypt, as well as their domination of the collective imagination of this sophisticated civilization. Hymns from The Book of the Dead illustrate the beliefs of the Egyptian peoples regarding the afterlife, judgment after death, resurrection, and immortality.

The writings of E.A. Wallis Budge are considered somewhat controversial today because of his use of an archaic system of translation, but useful illustrations and an abundance of information make them necessary resources for students of the ancient world as well as those of the evolution of historical study. Conveying the beauty and power of the religion of ancient Egypt, this fascinating book remains an important work today.

Book Description Routledge & K. Paul. Hardcover. Condition: Fair. A readable copy. All pages are intact, and the cover is intact. Pages can include considerable notes-in pen or highlighter-but the notes cannot obscure the text. At ThriftBooks, our motto is: Read More, Spend Less. Seller Inventory # G071007199XI5N00