Items related to The Ruling Caste: Imperial Lives in the Victorian Raj

The Ruling Caste: Imperial Lives in the Victorian Raj 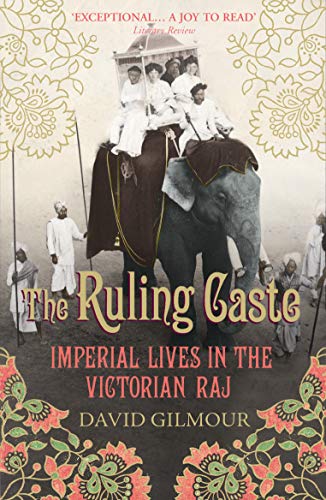 Historian David Gilmour provides a balanced and compelling account of the 1,000 or so officials and civil servants who administered vast areas of south Asia — nearly 300 million people — tracing their lives from recruitment to retirement.

David Gilmour is a novelist who’s earned the praise of literary figures as diverse as William Burroughs and Northrop Frye, and publications as diverse as The New York Times and People Magazine. His latest novel, Lost Between Houses, was a national bestseller in Canada and was shortlisted for the Trillium Book Award. Gilmour was film critic for CBC-TV’s The Journal and The National for eleven years, and was the host of Gilmour on the Arts, a Gemini-award-winning arts talk show, for four years. He lives in Toronto.

During their brief momentous period of collaboration, Joseph Stalin and Joachim von Ribbentrop agreed that it was absurd that so much of the world should be ruled by Great Britain. In particular, the Russian leader told the Nazi Foreign Minister, it was ‘ridiculous...that a few hundred Englishmen should dominate India’.1 He was referring to the men of the Indian Civil Service (ICS).

The statistic alone seems ridiculous. In 1901, when Queen Victoria died, the ‘few hundred’ numbered just over a thousand, of whom a fifth were at any time either sick or on leave. Yet they administered directly (in British India) or indirectly (in the princely states) a population of nearly 300 million people spread over the territory of modern India, Pakistan, Burma and Bangladesh.

Stalin’s grumble contained perhaps a touch of tacit admiration. More explicit praise came from earlier foreign leaders who, like him, had been in search of empires to rule. Bismarck thought Britain’s work in India would be ‘one of its lasting monuments’, while Theodore Roosevelt told the British they had done ‘such marvellous things in India’ that they might ‘gradually, as century succeeds century...transform the Indian population, not in blood, probably not in speech, but in government and culture, and thus leave [their] impress as Rome did hers on Western Europe’. 2

It is not difficult to find foreign eulogies of British civil servants in India, from the French Abbé Dubois, who in 1822 extolled their ‘uprightness of character, education and ability’, to the Austrian Baron Hübner who in 1886 ascribed the ‘miracles’ of British administration to ‘the devotion, intelligence, the courage, the perseverance, and the skill combined with an integrity proof against all temptation, of a handful of officials and magistrates who govern and administer the Indian Empire’. 3 Similar tributes can also be found in unexpected places in Britain. Lloyd George, the Liberal leader, lauded the Service as ‘the steel frame’ that held everything together, while John Strachey, the Labour minister, judged it the ‘least corruptible...ablest and...most respectable of all the great bureaucracies of the world’. 4

The same words recur again and again, even from Indian nationalists and their newspapers at the end of the nineteenth century: impartial, high—minded, conscientious, incorruptible. The ICS may have had its critics—even within its own ranks—but about its elevated standards there was no argument. N.B. Bonarjee, a member of the Service but also an Indian nationalist, praised ‘its rectitude, its sense of justice, its tolerance, its sense of public duty’, as well as ‘its high administrative ability’. 5 After independence in 1947, the new nations of Pakistan and India each displayed pride in its traditions. While in Karachi a Government pamphlet proclaimed that the Pakistan Civil Service was the ‘successor’ of the ICS, ‘the most distinguished Civil Service in the world’, in Delhi the Home Minister, Vallabhbhai Patel, used it as a model for the Indian Administrative Service, a body that played a crucial role in the integration and unification of the new state. Even at the beginning of the twenty—first century retired members of the IAS were recalling the exploits of their British predecessors with almost embarrassing effusiveness. 6

The high reputation of the ICS was never reflected in the literature of the country where most of its members were born. This was no doubt partly because civil servants do not make exciting characters in fiction, even when they do much of their work on horseback. During the existence of the Raj they sometimes appeared in the novels of largely forgotten authors such as Alexander Allardyce, Flora Annie Steel, W. W. Hunter, Edward Thompson and A. E. W. Mason. More recently they have featured in the fiction of three winners of the Booker Prize, although not in any leading role except in J. G. Farrell’s The Siege of Krishnapur, a historical novel about the Indian Mutiny. In Ruth Prawer Jhabvala’s Heat and Dust the civil servant is a hapless figure whose wife has an affair with the local nawab, while in Paul Scott’s The Jewel in the Crown he is an uncomfortable liberal who disavows his predecessors and is limited to a brief appearance in a single volume of the Raj Quartet.

Scott’s work, criticized both by Indian nationalists and by British conservatives, is a brilliant portrait of the Raj in its closing years. Yet it is limited not only in time but also in the range of its British characters, who (apart from some missionaries) are nearly all connected to the Army. Rudyard Kipling painted a fuller and richer picture of the Raj at its zenith, but this too is restricted in scope, mainly because he lived nearly all his time in the Punjab and left India at the age of 23. He also took most of his characters from the military (with a preference for NCOs and Other Ranks), and distributed his civilians in professions as diverse as forestry and engineering. Some of Kipling’s few civil servants are strong men, dedicated paternalists obsessed with duty and the welfare of Indians. But others are pedantic or frivolous or impractical. In his story ‘Tod’s Amendment’ he gave a 6—year—old boy more understanding of agricultural tenancies than the Legal Member of the Viceroy’s Council.

Although Kipling was the principal chronicler of British India, the most enduring effigy of its administrators was carved by E. M. Forster in A Passage to India. The two writers approached the Subcontinent from angles that could hardly have been more different. Kipling was born in India and returned at the age of 16 to earn his living as a journalist in Lahore. Forster had already published most of his novels by the time he sailed for Bombay in search of India and Indian friendships. There was nothing in his background, character or outlook that predisposed him to look favourably on the Raj. Indeed several of his friends in the Bloomsbury Group had abandoned their traditional family links with imperial rule.[*] They even persuaded one of their members, Rex Partridge, the son and nephew of ICS officials, to change his name to the less regal—sounding Ralph. 8

A Passage to India is a subtle and in certain ways sensitive work, a well—crafted drama with an evocative sense of place and some plausible Indian characters. But its author’s loathing of the British in India—a feeling he confessed to in private9—turned it into a tendentious political novel, at any rate for many of his contemporary readers. Kipling was fascinated by other men’s professions and wrote numerous stories about work; so was Scott, who diligently carried out research into how the British had administered India. But Forster was seldom interested in writing about work; he preferred portraying people at their leisure or in their domesticity in Florence and the Home Counties. He did not see civil servants inspecting hospitals or canals but witnessed them relaxing at ‘the Club’, where he judged them philistine and stupid. Then he turned them into caricatures. His District Officer, Turton, is pompous and absurd and wants ‘to flog every native’ in sight as soon as there is a crisis; his memsahibs are even worse, crude stereotypes, compounds of nothing but snobbery and racial prejudice. Their actions are seldom more credible than their characters. Forster makes them react to an obscure incident in a cave as if it had been a minor massacre. They gather at the club and make semi—hysterical suggestions about calling out the Army, ‘clearing the bazaars’ and sending the women and children to the hills. There is almost nothing believable about the scene at the club or about the arrest and trial of Aziz, where Forster’s ignorance of administration and judicial procedure let him down again. Yet these events, described in fiction and depicted in film, form one of the most abiding images of British India.

The principal historical portrait is a kinder one. Fifty years ago, a former civil servant, Philip Mason, published (under the pseudonym Philip Woodruff) his two volumes of The Men Who Ruled India, The Founders and The Guardians. They are the work of a wise man and a talented writer who wrote affectionately yet sometimes critically of a Service which had on the whole, he thought, justified its reputation for altruism and benevolent rule. Although regularly and unfairly denounced by post—colonial critics as hagiography, it is the work on the subject best known to non—academic readers.

Two historiograpical developments in the late 1970s changed academic attitudes towards the Service. The most important was the publication in 1978 of Edward Said’s Orientalism, a hugely influential book that spawned legions of disciples, in India and elsewhere, who took it for granted that colonial rule was always evil and colonialist motives were invariably bad. The other was a sudden interest shown by a number of North American historians in demolishing the reputation of the ICS. In 1976 Bradford Spangenberg published a thesis claiming that the Service was obsessed with status and promotion and declaring that, as a result of his ‘scrutiny of the characteristics and motivations of British officials’, he had destroyed the ‘myths’ of its efficiency and ‘self—sacrificial esprit de corps’. Although his ‘scrutiny’ generally and curiously eschewed the examination of civil servants’ pri...

2. The Ruling Caste: Imperial Lives in the Victorian Raj

3. The Ruling Caste: Imperial Lives in the Victorian Raj