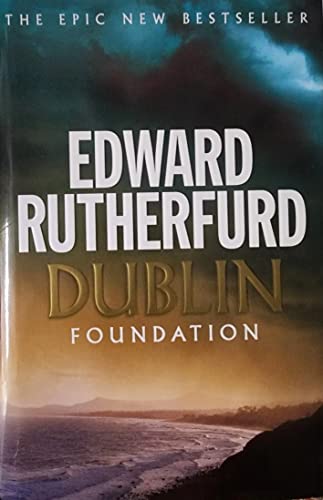 Rutherfurd's epic style, famously exercised in his dramatic accounts of Sarum, Russia and London, makes this saga, set against the backdrop of the great events of Irish history, so readable and moving. With the help of some of the country's leading historians, Rutherfurd has unearthed many curious gems that overturn our traditionally perceived notions of Ireland's past: - There were significant numbers of English people in early Ireland - they were actually slaves to the Irish Patrick was not a name the Irish ever used until modern times. For centuries, the saint's name was held in such reverence that the Irish would only call themselves Gilpatrick, which means 'servant of Patrick'. It was the one and only English Pope who first told the English King to conquer Christian Ireland in the Middle Ages. St Stephen's Green is the well-known centre of fashionable Dublin and is named after a small leper hospital that used to be there; Leopardstown racecourse is so-called because the land it is on also belonged to a leper hospital. The people in Ireland who most hated the Reformation were actually the English in Ireland, who were the strictest Catholics at that time.

Edward Rutherfurd was born in Salisbury, England, and educated at Cambridge University and Stanford University in California. A former resident of London and New York City, Edward Rutherfurd has had a home in Dublin for more than ten years. He has two children.

"Expertly researched, full, undemanding and highly readable account of a place he has grown to know well" -- Maeve Binchy * Ireland on Sunday * "The author writes with a charm and an authority that comes from considerable research this is a really handsome book" * Irish Independent * "The author bounds excitedly through Irish history, interweaving narrative with historical encounters. . . Rutherfurd keeps racing through the pages" * Daily Express * "Sublime talent. . . this is history with a human face and a fanciful soul" * Good Book Guide *

Book Description Century, 2004. Hard Back. Condition: Brand New. Dust Jacket Condition: Brand New. 1st. Rutherfurd managed to encapsulate the drama of Salisbury, Moscow, London and the New Forest in one volume in his previous best-sellers "Sarum", "Russka", "London" and "The Forest". But such was the wealth of new material uncovered for this volume, Rutherfurd has taken the unprecedented step of splitting the hardback publication in two. The first of the two books, "Dublin: Foundation", will take us from prehistory, the High Kings of Tara, the Viking invasion, the machinations of Henry II and the greed of Henry VIII to the burning of the saint's relics in front of Christchurch cathedral in 1538. At the end of this majestically sweeping narrative, Rutherfurd effectively closes the story of the 'Irish' Irish: the descendants of Fingall and Cuchulainn, the princes and Kings of Tara of Brian Boru and the spiritual descendants of Patrick himself. All of our books are in the shop, and are 'real' books. We try to post the same day as the order. Descriptions are conservative. Postage rates may be lower than ABE estimate, please use Ask Bookseller a Question to confirm availability and postage cost, use [Ask Bookseller a Question] option below to confirm availability and get accurate postage quote for this item (the amount quoted is for an 'average' hard-cover book of up to 1kg in weight). Seller Inventory # 016567