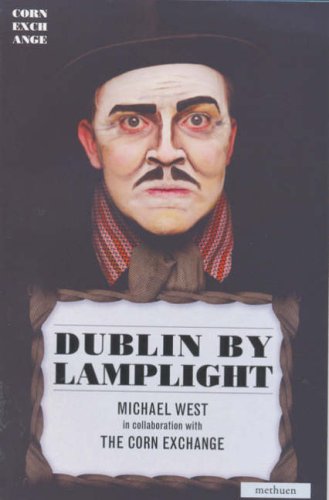 Martyn Wallace awoke in his boarding house and held his aching head. His room was brown and dirty and bare. He called it Reading Gaol.

Amidst the filth and fury of Dublin 1904, the theatrical event of the century is about to explode! Fading stars, rebels, whores and romantics irreverently expose the strange and lurid world of Dublin by Lamplight.

An instant hit when it first opened in 2004, this hugely entertaining and anarchic production is a night to change a nation's destiny! Unless it all goes horribly wrong . . .

Written by Michael West in collaboration with Corn Exchange theatre company, Dublin by Lamplight was first produced at the Project Arts Centre in Dublin in 2004, before a transfer to the Traverse Theatre, Edinburgh, in 2005. This new edition of the playscript was published to coincide with a major revival at the Abbey Theatre in spring 2017

Michael West has written several plays in collaboration with Annie Ryan and The Corn Exchange including Man Of Valour, Freefall (Best New Play at the Irish Theatre Awards and at the Irish Playwrights and Screenwriters Guild) and the world premiere adaptation of James Joyce's Dubliners presented in association with the Dublin Theatre Festival 2012. Other work for The Corn Exchange includes EVERYDAY, Dublin By Lamplight, Foley, an adaptation of Lolita (in a co-production with the Abbey) and The Seagull which will premiere at the Dublin Theatre Festival in 2016.

He has translated or adapted many texts, among them The Marriage of Figaro for the Abbey; a version of Death and the Ploughman by the Bohemian 14th century writer Johannes Von Saaz for Christian Schiaretti of the TNP in Lyon and produced by SITI company and directed by Anne Bogart in the USA; and plays by Molière, Marivaux, Calderón and the contemporary French poet, Jean-Pierre Siméon. His latest translation, Forever Yours, Mary-Lou by Michel Tremblay premiered at the Theatre Royal in Bath in March 2016.

He has written two plays for younger audiences, Jack Fell Down and Forest Man, and in 2014 the Abbey Theatre presented a world premiere of his most recent play Conservatory. For the last year he has been writer-in-residence at University College Cork.

A tour de force of theatrical vision . . . wickedly entertaining . . . It's like leaving the table after a perfectly chosen and cooked meal served in terrific company
Sunday Independent