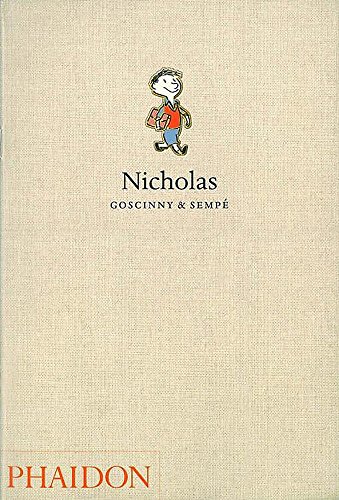 US edition. The day-to-day adventures of an amusing, endearing young school boy.

Phaidon takes a sure step into the children's book arena with this entirely engaging volume, a winning combination of writing, translating and illustrating that gives youngsters a flavor of France (where it has been a bestseller since its 1959 publication). Goscinny's (Asterix) collection of 19 linked tales stars high-spirited narrator Nicholas, a French schoolboy who, along with his classmates, has a knack for landing in trouble. Seemingly quotidian situations in Nicholas's life yield riotous repercussions, as the incessant squabbling among the youngsters tends to result in a delightful domino effect, until events culminate in a comedic climax. A disastrous class photo session drives the photographer away before he snaps the shot, a pick-up soccer game sends the kids bickering about their positions until they're finally set (then realize they have no ball), and a new boy in class who doesn't speak English spouts the off-color language he has picked up from his peers. The hero's recurring references to several students function as humorous comic bits (such as Alec, "my friend who is fat and he likes eating" or Cuthbert, who "is top of the class and we're not crazy about him, but we can't hit him because he wears glasses"). New Yorker and Paris Match artist Sempé's droll line drawings reinforce the text's exuberance, and Bell's translation gives the narrative a wry British spin. And there's additional good news: the publisher has scheduled more Nicholas adventures for future release. Ages 9-12.

Rene Goscinny (1926-77), born in Paris, lived most of his early years in Buenos Aires and New York. He returned to France in the 1950s where he met Jean-Jacques Sempe and together they created the character of Nicholas, the famous schoolboy. He later worked with Albert Uderzo on making the adventures of Asterix the Gaul. A prolific and internationally successful children's author, he is also the creator of Lucky Luke and Dingodossiers, among others. He received Cesars repeatedly for his numerous animated cartoons. Jean-Jacques Sempe (b.1932), expelled from school for bad behaviour, enjoyed a vast range of jobs including winebroker and supervisor at children's holiday camps. His world-renowned illustrations and cartoons are featured on the covers of the New Yorker magazine and amuse the readers of Paris Match and the Figaro Litteraire on a weekly basis. Anthea Bellwas awarded the Independent Foreign Fiction Prize and the Helen and Kurt Wolff Prize (USA) in 2002 for her translation of W.G. Sebald's Austerlitz. Her many works of translation from French and German (for which she has received several other awards) include the Nicholas books and, with Derek Hockridge, the entire Asterix the Gaul saga by Rene Goscinny and Albert Uderzo.