Items related to Flight of Eagles 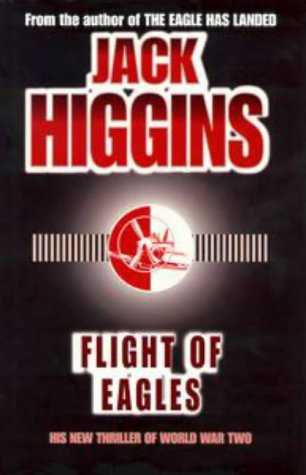 Brothers Max and Harry Kelso found themselves fighting on opposite sides in World War II - Max as one of the Luftwaffe's most feared pilots, Harry as a Yank ace in the RAF. They had been separated as boys, but neither could have predicted the circumstances under which they would next meet.

Since The Eagle Has Landed—one of the biggest-selling thrillers of all time—every novel Jack Higgins has written has become an international bestseller. He has had simultaneous number-one bestsellers in hardcover and paperback, and many of his books have been made into successful movies, including The Eagle Has Landed, To Catch a King, On Dangerous Ground, Eye of the Storm, and Thunder Point. He has degrees in sociology, social psychology, and economics from the University of London, and a doctorate in media from Leeds Metropolitan University. A fellow of the Royal Society of Arts, and an expert scuba diver and marksman, Higgins lives in Jersey on the Channel Islands.

An old-fashioned framing device kicks off this rerelease: The author and his wife survive a rough plane ride on a stormy night. While recovering in a small inn, they hear a WWII yarn -- the tale of twin American brothers who fought for opposite sides in the war and the plan concocted by desperate Germans to take advantage of their resemblance. The switching of twins is a classic theme, but the skills of both author Jack Higgins and narrator Patrick Macnee keep the tale fresh and entertaining. Higgins's skill in recreating the war era makes this one worth catching up on. J.A.S. © AudioFile 2002, Portland, Maine-- Copyright © AudioFile, Portland, Maine