Six Frigates: How Piracy, War and British Supremacy at Sea Gave Birth to the World's Most Powerful Navy 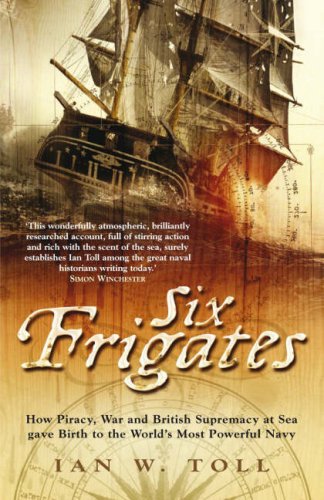 On October 21st, 1805, an English fleet commanded by Lord Admiral Horatio Nelson hunted down and annihilated the combined fleets of France and Spain in an immense sea battle off Cape Trafalgar, near the Spanish coast. The Battle of Trafalgar, as it came to be known, crowned the Royal Navy as undisputed sovereign of the world's oceans. Her naval dominance over the century that followed was absolute. After Trafalgar, Britain's fleets held sway over the Atlantic, the Pacific, the Indian, the Caribbean, the North Sea, the Baltic and the Mediterranean. Her bases were far-flung, strategically located, and unassailable; she sailed out of Chatham, Sheerness, Plymouth, Portsmouth, Kinsale, Gibraltar, Port Mahon, Malta, Halifax, Bermuda, Jamaica, Barbados, Antigua, Capetown, Bombay, Calcutta, Trincomalee, Jakarta, Pelu Pelang and New South Wales. The global power of the Royal Navy was unlike anything the world had ever seen before. And yet, just seven years after Nelson's final, fatal victory, British ships were at war with a new enemy. Not, this time, a traditional European Great Power, but a challenger from the new world: the United States of America. Her fledgling navy was small and untested and Royal Navy officers were confident of success, arrogant. Faced with this young pretender, defeat was unthinkable. But their opponents were skilled and committed, the American ships innovatively designed and strong because of their costly, difficult live oak construction. The British would soon discover that they had a fight on their hands. And it would be a bloody one. Admirably researched, rich in detail and inhabited by a gripping cast of real-life, three-dimensional heroes and villains, "Six Frigates" traces the genesis of a fleet that would, ultimately, replace Britain's as the world's most powerful. And it captures the moment when the Royal Navy first caught a glimpse of the future. Creaking wood, whipping sails, the bark of orders and the bludgeon and thunder of cannon come magnificently alive in its pages. Utterly compelling, this is naval history at its most vivid, readable, convincing and entertaining.

Ian W. Toll has been a Wall Street analyst, a Federal Reserve financial analyst, and a political aide and speechwriter. A lifelong sailor, Toll's research into British and American naval history dates back to the early 1990's, when he was first introduced to the historical novels of Patrick O'Brian. Six Frigates is his first book

The birth of the U.S. Navy and its coming-of-age in battle against the French, the Barabary/Tripolitan pirates, and the British are recounted in this work. In the 1790s, a new navy was built around six new frigates that incorporated numerous technological innovations. These ships, along with their leaders and crews, cemented many of the traditions of our naval service. Stephen Lang effortlessly displays the qualities that make him a popular narrator. Foremost is his consistency. As we hear of how USS Constitution earned her nickname of "Old Ironsides" and the audacity of the raiders led by Lt. Stephen Decatur to burn USS Philadelphia in Tripoli, we are treated to Lang's smooth baritone, subtle expression, and seemingly effortless delivery. M.T.F. © AudioFile 2007, Portland, Maine-- Copyright © AudioFile, Portland, Maine

1. Six Frigates: How Piracy, War and British Supremacy at Sea Gave Birth to the World's Most Powerful Navy

2. Six Frigates: How Piracy, War and British Supremacy at Sea Gave Birth to the World's Most Powerful Navy

3. Six Frigates: How Piracy, War and British Supremacy at Sea Gave Birth to the World's Most Powerful Navy

4. Six Frigates: How Piracy, War and British Supremacy at Sea Gave Birth to the World's Most Powerful Navy