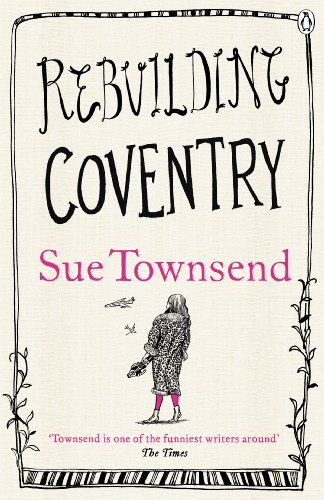 From its title on, Sue Townsend's short, utterly entertaining novel is full of jokes both sly and slapstick. The Coventry of the title is one Coventry Dakin, the novel's narrator, and a devoted, intelligent, but intensely bored wife and mother maintaining her dull husband and two nearly-grown children in suburban Midlands. Coventry also just killed her neighbor, a jerk named Gerald Fox who's been spreading nasty (and false) rumors about her. Now she's on the lam, and Townsend, author of the well-loved Adrian Mole series of books, takes us down and out on a comic excursion into London, where Coventry, now a penniless fugitive, seeks protection with both the lowest and highest levels of British society.

Sue Townsend is Britain's favourite comic author. Her hugely successful novels include eight Adrian Mole books, The Public Confessions of a Middle-Aged Woman (Aged 55A ), Number Ten, Ghost Children, The Queen and I and Queen Camilla, all of which are highly acclaimed bestsellers. She has also written numerous well-received plays. She lives in Leicester, where she was born and grew up.