Items related to The politics of Jean Genet's late theatre: Spaces of... 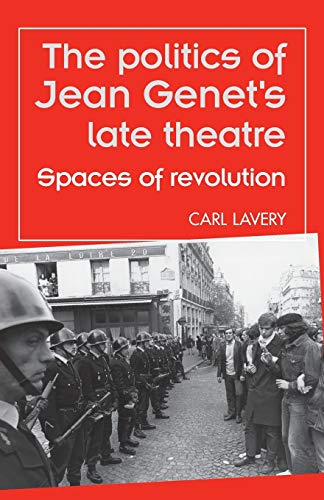 The politics of Jean Genet's late theatre is the first publication to situate the politics of Genet's theatre within the social, spatial and political contexts of France in the 1950s and 1960s. The book's innovative approach departs significantly from existing scholarship on Genet. Where scholars have tended to bracket Genet as either an absurdist, ritualistic or, more recently, a resistant playwright, this study argues that his theory and practice of political theatre have more in common with the affirmative ideas of thinkers such as Henri Lefebvre, Jacques Rancière and Alain Badiou. By doing so, the monograph positions Genet as a revolutionary playwright, interested in producing progressive forms of democracy.

This original and interdisciplinary reading of Genet’s late work will be of interest to students and practitioners of Theatre, as well as those interested in French and History.

Carl Lavery is Senior Lecturer in Drama, Theatre and Performance at Aberystwyth University

Lavery’s brilliant analysis of the political meanings of Genet’s late drama can be understood as paying homage to Genet’s conceptual recedents. Thus does Lavery become part of a unique school of scholars, including Derrida, whose theoretical work reflects mimetically and matches the complexity of Genet’s own theorizing.' Yehuda Moraly, Modern Drama, 01/04/2012 'The Politics of Jean Genet’s Late Theatre: Spaces of Revolution is exceptionally engaging, and will provide excellent reading for those interested in Genet and French culture in the tumultuous years that marked the end of the Fourth Republic and the beginning and early years of the Fifth; or indeed to anyone interested in modern theatre and drama and, especially, its potential as a force for truth and justice.' Matthew Yde, Theatre Survey, Volume 54, Issue 01 'This is a highly readable and stimulating book that is sure to generate fruitful discussion from future scholars' Maire´ad Hanrahan, French Studies, vol 67, no 2

1. The Politics of Jean Genet's Late Theatre: Spaces of Revolution (Paperback or Softback)

4. The Politics of Jean Genets Late Theatre: Spaces of Revolution

6. The Politics of Jean Genets Late Theatre: Spaces of Revolution